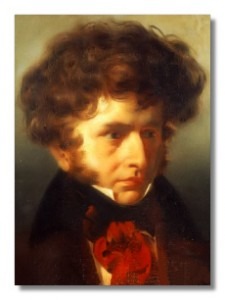 In 1826’s, Hector Berlioz first became aware of the French translation of the Irish Melodies by Thomas Moore. Together with the translator Thomas Gounet, who was also a close personal friend, Berlioz published a set of 9 Melodies, Op. 2 in February 1831.

Hector Berlioz: 9 Melodies, Op. 2 (excerpts)
This collection was the first musical outcome of his love for the Irish actress Harriet Smithson. In a letter of 2 March 1829, which recounts the story of Harriet’s refusal to meet him, Berlioz confirms the connection between Moore and himself. He writes: I read Moore; his melodies draw tears from me from time to time. He is her compatriot: Ireland, always Ireland! Charles Rosen has suggested, “Although the Nine Melodies on poems by Thomas Moore have been provided with an aura of romantic inspiration and autobiographical meaning, they were essentially commercial ventures written in familiar forms and for specific markets. Their strength lies not in transgression but rather in adherence to convention.” Be that as it may, Berlioz’s romances and melodies occupy a central position in the historiography of French song. He is often seen as the composer who transformed the apparently tame “Romance”—a musical setting of a lyrical, strophic poem on an amorous or epic subject—into a serious form modeled after the German Lied.

When Berlioz composed his Romances, the genre had already been in existence for more than a hundred years. It had bridged the social space between public and private performance by contributing substantially to the opera comique, and by defining musical performances in the salon. From the 9 Melodies of 1831 to the orchestrated version of Nights of Summer of 1856, Berlioz’s role as the creator of French art song has been hotly debated. However, it seems more important to discover and recognize the composer’s role in an on-going process, as he responded to developments in the genre and contributed his own strategies and innovations. Berlioz appropriated song for his autobiographical project, and provided us with a dense web of possible readings through successive and ever-changing editions.