Opinion
Should I Be Standing Now?
by Frances Wilson February 9th, 2016 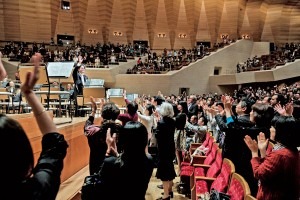 A standing ovation is a form of applause where members of a seated audience stand up while applauding after extraordinary performances of particularly high acclaim. In Ancient Rome returning military commanders (such as Marcus Licinius Crassus after his defeat of Spartacus) whose victories did not quite meet the requirements of a triumph but which were still praiseworthy were celebrated with an ovation instead, from the Latin ovo, “I rejoice”. The word’s use in English to refer to sustained applause dates from at least 1831 (source: Wikipedia)

We applaud to show our appreciation of the performance and performer/s; we stand, while continuing to applaud, to amplify our appreciation and to celebrate what we have just heard/seen. At a London concert a few years ago by the esteemed and now very elderly Austrian pianist Paul Badura-Skoda, the standing ovation came almost before the final note of Schubert’s last sonata ceased to resonate around the hall (St John’s Smith Square). No matter that there were quite obvious errors in most of the pieces Badura-Skoda performed, we were celebrating the fact that a man in his late 80s was still performing and obviously thoroughly enjoying himself. And throughout his performance he exuded such warmth, wit and pleasure, and created such a wonderful intimacy in the big space of St John’s Smith Square, we felt bound to show our gratitude and appreciation for all of this.

Some people deem standing ovations unnecessary or even narcissistic, a curious form of attention-seeking which screams “look at me, look how much I appreciated the performance!”, but in general standing to applaud seems to be largely a spontaneous act (I mean, do concert and opera-goers seriously think in advance of the performance “I’ll definitely be standing up later!”?). It is interesting to observe how a collective feeling can quickly sweep through an audience (in the way it does with football fans who suddenly seem to be singing You’ll Never Walk Alone) causing people to stand up to applaud, or not. It is this collective impulse, impelled by some unseen force, which suggests that the mass ovation is not necessarily a premeditated act. More often than not the ovation is given in response to a really fine or moving performance, but some performers always seem to guarantee an ovation because of their statue – Gustavo Dudamel or Daniel Barenboim, for example, or that other elder statesman of the piano Maurizio Pollini. In these instances, the audience is showing its respect and appreciation for the person as well as the performance. By contrast, at political party rallies and conferences the standing ovation has become de rigeur, regardless of the quality or content of the speeches. Such ovations seem very obvious toadying to one’s party leader, rather than any sincere display of commitment or belief.

Ovations shouldn’t be given too freely, however (and some British theatre and music critics worry that the trend for ovations in theatres and opera houses devalues them, rendering them a meaningless collective act). So, don’t stand just because everyone else around you is if you don’t feel the performance merits such praise. The ovation is the last gift to the performer from the audience and signals to the performer that it’s the best thing you’ve seen or heard in some time.

Perhaps the most amusing incidence of the standing ovation – and one which has become ingrained in the British concert culture – is the collective rising to one’s feet during the ‘Hallelujah’ chorus from Handel’s Messiah, a tradition which stems from one of the first performances of the work when King George II apparently mistook the chorus for the National Anthem. In keeping with royal protocol, the audience had to stand during the chorus too. This has now become customary, and at the last performance of the Messiah I attended the week before Christmas, just before the first notes of the ‘Hallejulah’ Chorus sounded, the conductor turned to the audience and indicated that they should rise – which we did, as one.