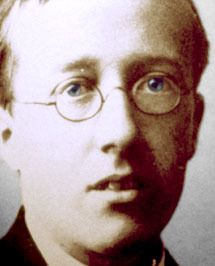 Primarily known for his vastly influential orchestral compositions—most notably The Planets—Gustav Holst (1874-1934) nevertheless composed a wide variety of moving choral works. At the tender age of 12, he won a prize in an amateur competition with his vocal work A Christmas Carol. His most popular choral composition, Hymn of Jesus, dates from 1914 and helped to establish his international reputation. One of the few early works of Holst to survive his scrupulous self-criticism is an unassuming setting of the Ave Maria for eight-part female chorus. Completed in 1900, shortly after he abruptly left the Royal College of Music, the composition is dedicated to the memory of his mother, Clara Lediard Holst, who died when he was a child. Largely self-taught as a composer, this early devotional setting noticeably reflects Holst’s multifaceted personality by simultaneously combining clarity of expression with romantic exuberance. Scored for eight independent parts, the music skillfully combines modal and tonal harmonies to produce a setting that sounds both ancient and modern. Smoothly flowing counterpoint creates harmonies of varying intensity and colour, as the chorus is frequently divided into smaller units. In effect, this subdivision creates two independent choruses that musically respond to the demands of the text. This prophetic little jewel clearly points to his later musical accomplishments, as it is breaking away from the heavy chromaticism of Wagner. Simultaneously, it rejects the austerity of Victorian church music by using dissonances within a diatonic harmony with much greater freedom. Sadly, Holst was unable to support himself by his compositions, and so he played the trombone professionally and later became a respected teacher. Nevertheless, the composer Edmund Rubbra suggested, “Holst’s influence is lasting in the work of all of us who value directness and sincerity and who view music not so much a secret preserve for the leisured few but as a vital part of everyday life.”