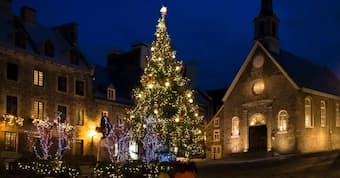 Gottfried Vopelius (1645-1715) published his “Neu Leipziger Gesangbuch” (The new Leipzig hymnbook) in 1682. Vopelius was a Lutheran academic and hymn-writer, and he writes in the preface that the hymns are “compiled from the most beautiful and best songs; In which not only songs of the blessed Dr. Luther, and other songs with the Word of God, and in accord with the unmodified Augsburg Confession, but also songs as introduced and customary in other untainted Evangelical places and regions, and Latin hymns and psalms, set for four, five and up to six voices… and whatever else is sung in regular church service.” Vopelius tells us that Luther’s popular Christmas chorale “Gelobet seist du, Jesu Christ” (All Praise to Thee, O Jesus Christ) was the Hymn of the Day during Christmas Time in Leipzig. According to scholars, “the text and music to this hymn has medieval origins, and the first stanza was known long before the Reformation and frequently sung on Christmas Day.” For centuries, “Gelobet seist du, Jesu Christ” was the prominent hymn for Christmas Day in German speaking Lutheranism. During his tenure at St. Thomas in Leipzig, Johann Sebastian Bach composed a variety of settings for the musical sequence of Christmas Day. 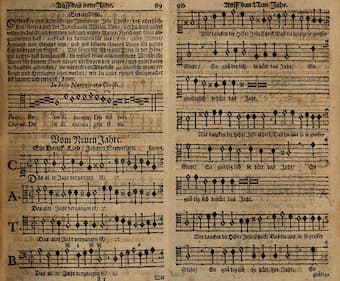 Bach first used the hymn in Cantata 64, “Sehet, welch eine Liebe hat uns der Vater erzeiget” (Behold, what a love has the Father shown to us). This Christmas cantata was composed in Leipzig in 1723 for the third day of Christmas as part of his first cantata cycle. The second movement presents a plain four-part chorale setting of the Christmas hymn with words by an unknown poet. For Christmas Day in 1734, Bach used the same plain choral setting twice in his Christmas Oratorio BWV 248. In addition, Bach used the Christmas hymn as the basis of short liturgical compositions for organ. These chorale preludes or chorale settings were probably used to introduce the hymn about to be sung by the congregation, and Bach composed 46 such completed settings in his Orgelbüchlein. 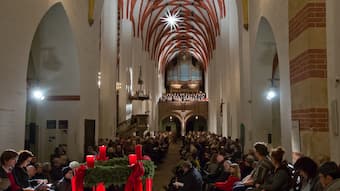 The chorale prelude settings by Bach are typically polyphonic, with the chorale tune clearly audible. The tune is often highly ornaments, as in BWV 604, and the accompaniment might be ingeniously derived from motives taken from the chorale melody, or independently. An eminent organist writes, “Each approach to Bach’s organ chorales—their beauty, their symbolism, their mastery—is rewarding. One of the most remarkable features of most of the settings is that the accompaniment and the motifs from which it is composed are newly invented and are not related thematically to the melody.” In BWV 604 the ornamented chorale melody is sounded in the upper voice and supported by “a closely woven and harmonically subtle counterpoint in three parts. While being highly elaborate in their harmonic and contrapuntal detail, the beginnings and endings of phrases generally coincide with those of the chorale.” Bach cast a given choral into a variety of different guises, such as the Fughetta super: “Gelobet seist du, Jesu Christ,” BWV 697. It has been suggested that BWV 697 was part of a fughetta cycle for Advent and Christmas that was passed down via Bach’s student Johann Philipp Kirnberger.

For his second annual cycle of chorale cantatas, Bach composed the Christmas cantata BWV 91. It is based on the main chorale for Christmas Day, and it was first performed on 25 December 1724. The unknown poet of the cantata based the text on the prescribed readings for the feast day, and Bach composed six festive movements for soprano, alto, tenor, and bass; a four-part choir, two horns, timpani, three oboes, two violins, viola and basso continuo. In the opening chorus, the choral melody is sung by the sopranos, with the lower voices set in imitation. Parts of the instrumental ritornello serve as interludes between the five lines of text, and also as the accompaniment for the vocal parts. The second-movement recitative is contrasted with chorale phrases that are accompanied by the first line of the chorale in double tempo. Oboes accompany the tenor aria, and strings illuminate the subsequent recitative. After a duet contrasting poverty and abundance, the cantata concludes with the plain choral setting we already know from BWV 64. “Bach performed this cantata again four more times, on 25 December in 1731, in 1732 or 1733, and twice in the 1740s, even after his Christmas Oratorio had been first performed in 1734.” Bach was a master of virtually every musical form of his day, as witnessed in the brilliant chorale-based cantatas he crafted during his tenure in Leipzig. I am not sure that there was ever another composer who understood his craft as thoroughly as did Johann Sebastian Bach. Merry Christmas!