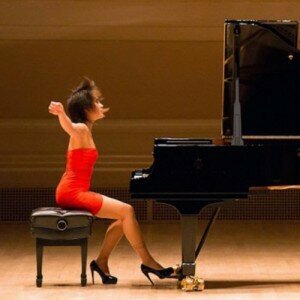 It’s one of the great romantic images, isn’t it? The solo performer, alone on an empty stage, faced with that huge black beast of a full-size concert grand piano, armed with nothing but his or her memory and willing, well-trained fingers.

There’s a lot of snobbery surrounding memorisation, and yet it’s one of the most absurd things pianists put themselves through. We have Clara Schumann and Franz Liszt to thank (or blame!) for the tradition of the pianist playing from memory, and both were significant in turning the piano recital into the formal spectacle it is today. Before the mid-nineteenth century, pianists were not expected to play from memory and playing without the score was often considered a sign of casualness, or even arrogance: Beethoven disapproved of the practice, feeling it would make the performer lazy about the detailed markings on the score; and Chopin is reported to have been angry when he learnt that one of his pupils was intending to play him a Nocturne from memory.

Few pianists today would dispute the legacy of Liszt and Clara Schumann, and now playing from memory is almost de rigeur, so much so that if you go to a concert where the pianist plays from the score, you may hear mutterings amongst the audience, suggesting the performer isn’t up to the job or has not prepared the music properly. Which is of course rubbish: sometimes, especially in contemporary or very complex repertoire, it is simply not possible to memorise all of it. Interestingly, memorisation has actually limited the range of repertoire performed in concert: many soloists won’t commit themselves to more than a handful of works each season because of the burden memorization places upon them (as pianists, we have to learn more than double the number of notes of any other musician!).

There are sound reasons for playing from memory and it should not be regarded simply as a virtuoso affectation (the ability to memorise demonstrates a very high degree of skill and application). It can allow the performer greater physical freedom and peripheral vision, more varied expression and deeper communication with listeners. But the pressure to memorise (a pressure which is imposed upon pianists from a young age and reinforced in music college or conservatoire) can also lead to increased performance anxiety – I have come across a number of professional pianists who have given up solo work because of the unpleasant pressure to memorise and the attendant anxiety. The late great Russian pianist Sviatoslav Richter gave up playing without the score when he reached his 60s as he felt he could no longer rely on his memory, and Clifford Curzon and Arthur Rubinstein both struggled with memorisation.

While each individual will have his or her own particular method of memorisation, pianists in fact utilise four types of memory, all of which must be employed when learning music:

Visual Memory: human beings use this part of their memory function to record large amounts of information, such as faces and colours and everyday objects. Music is made up of patterns and shapes, and the pianist uses visual memory to “picture” the score, as well as to recall the physical gestures involved in playing.

Aural/Auditory Memory: this is what enables us to sing in the shower! Music is an assortment of sounds, arranged in a certain order. The pianist uses aural memory to know he/she is playing the correct notes and to anticipate what he/she will play in the next few seconds.

Muscular/Procedural/Kinesthetic Memory: the ability to recall all the movements, gestures and physical sensations required to play music. Muscular or “procedural” memory is trained by repetitive practice: just as the tennis player practices his over-arm serve in exactly the same way each time to ensure a perfect delivery, so the pianist must employ repetitive practice to ensure the fingers land on the right notes every time.

Analytical/Conceptual Memory: the pianist’s ability to fully comprehend, absorb and retain the score through his/her intimate study and knowledge of it. This involves understanding structure, harmony, dynamics and nuances, phrasing, reference points, modulations, repetitions etc, as well as the context in which the music was composed, whether it is Baroque, Classical or Romantic, for example. This “total immersion” in the score should result in a rich, multi-layered awareness of it.

I go to many live piano concerts every year and I have noticed a growing trend: more solo pianists (Alexandre Tharaud is a notable example) are now using the score (accompanists and collaborative pianists tend to use the score, with the assistance of a page-turner, or the more modern alternative of an iPad or tablet with a score-reading app). It is possible to perform from the score and to deliver a quality performance which is rich in expression, gesture, and musicality. Well-managed page-turns, with the assistance of a discreet page-turner, should not detract from the performance, and after all, isn’t a concert fundamentally about communication, between performer, composer and audience? If you get that right, nothing else should matter.