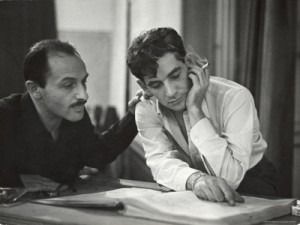 It’s hard to imagine someone who called the music of Kurt Weill (the composer of ‘Mack the Knife’) ‘drivel’ eventually writing musicals and popular songs himself. Yet for Marc Blitzstein, this huge shift in aesthetic was just the start – he was an openly gay communist murdered in the sixties by a group of sailors. So, for someone whose life contained so much drama (and who was such a driving force in American popular music), why don’t we know more about him?

As a young composer, Blitzstein studied with Nadia Boulanger, pedagogue to so many great musicians of the twentieth century, including Copland, Carter, Barenboim, and Piazzolla. His earlier works are heavily modernist in style, and before he became the composer of the musicals The Cradle Will Rock and Regina, his artistic views were something quite different.

Of Weill he purportedly claimed that ‘he hasn’t a thing to say in his music’, that he ‘always takes the easy way out…his music is essentially ugly because it is characterless.’ Listening to his Piano Concerto of 1931 gives us a glimpse into this modernist aesthetic, where percussive rhythms rub shoulders with complex, intricate harmonies. With that said, the dissonant chords and harsh rhythms do give way to something more ‘conventionally’ beautiful, especially in the elegiac second movement.

Blitzstein proclaimed his sexuality openly, but married the novelist Eva Goldbeck in 1933. When Goldbeck died in 1936, Blitzstein’s grief prompted him to start writing his highly political musical The Cradle Will Rock, which premiered in 1937.

In his heyday, Blitzstein was at least as famous as Leonard Bernstein; indeed, the two were close personal friends, in addition to them adopting a similar musical style. People often compare the two when talking about American song, and both shared a similar period of artistic activity. So why is Bernstein a household name while Blitzstein registers little or no recognition?

Of course, there is no one particular answer. Blitzstein’s major works came earlier than Berstein’s, meaning the former was active when the world of American theatre and musicals was still finding its feet. Bernstein’s West Side Story didn’t appear until the fifties, meaning he was combining what were by then pre-existing styles to form something unique and, more importantly, memorable.

There are also many more factors at play – marketing, publicity, commercial appeal – than we perhaps want to admit. The mistake isn’t accepting that Bernstein is more famous than Blitzstein – the mistake is equating fame with technique and ability.

Obviously we can’t deny that Bernstein wrote many great works – West Side Story and On the Town to name just two – but we must remember that Blitzstein was working at a time when the genre was still establishing itself. At the time of the premiere of The Cradle Will Rock, many of America’s ‘classic’ musicals didn’t even exist yet: Oklahoma didn’t appear until 1943; On the Town wasn’t in town until 1944; Annie Get Your Gun wasn’t getting anybody until 1946.

It’s important we don’t push composers on the fringe of popular awareness even further away. We can compare Bernstein with Blitzstein until we’re blue in the face, but we need to take care to see them as two very separate artistic identities. Blitzstein was a monumental force in the solidification of the genre of American popular song, someone who helped create the frame into which composers such as Richard Rogers and Leonard Bernstein could tread.

So while Blitzstein’s legacy may not enjoy the public acclaim it did half a century ago, he was pretty ahead of the game, and helped to crystallise a style of music that has given joy to millions around the world ever since.