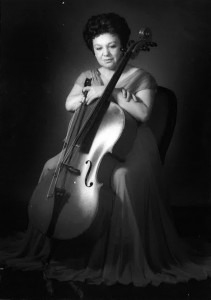 The time you spend with a stand partner in an orchestra frequently exceeds the time you spend with your spouse. I had three long-term stand partners all vastly different in approaches. My first stand partner was the veteran and irascible principal cello of the Indianapolis Symphony, Shirley Tabachnick. The orchestra had hired me right after I graduated from Indiana University. The cello section placed bets on how soon Shirley would bite the head off the green young player (me). She had her rules. I was not allowed to touch her part—the sheet music that we shared. Her markings were color-coded—a green pencil was used for tempo or style indications written (by her only) above the staff, blue pencil for dynamic markings that went below the staff, fingerings in graphite pencil above the staff. Red pencil marks were for danger signals such as reminders of an unusual notation or a repeat mark in the music, or a grand pause for the entire orchestra, which if missed, would result in one of us playing all alone in a rest! She set an enormous black bag next to her seat in which she carried all of these pencils as well as extra strings, bridges, cello pegs, tools, rosin—virtually everything for all emergencies. My job as the “inside player” sitting on the right of the stand, was to turn the pages at a warp speed so Shirley wouldn’t miss a note. Fumbling with the pages was out of the question.

I arrived early for my first concert as newly appointed associate principal cello to make certain that I had all the tough parts well in hand. I carried my cello to my seat onstage. Shirley too soon came out onto the stage. She was not pleased. I was sitting there AHEAD and BEFORE her. I found out later that she sat down at the back of the section in the last chair to warm up, barely containing her ire. I had violated one of her (many) unwritten rules. 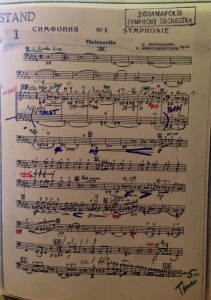 Cello solo page of the Shostakovich Symphony no 1, marked by Shirley

I was fashionable young lady. I was dismayed that we were required to purchase a gown designed for the orchestra women. The billowing sleeves and bodice made me look like a bat. To add fuel to the fire for this, my first concert, I donned a silver shimmery scarf to try to salvage my appearance. During my warm up I turned around for a moment to consult the part on the second stand. Said Principal noticed my infraction. She proceeded to speak to the Personnel Manager, and I was quickly summoned backstage. Needless to say, I returned to my seat chagrined and scarfless.

During week two we rehearsed the Beethoven Symphony No. 3, The Eroica. In the slow movement the conductor wanted a different bowing. This affected the entire string section and we quickly made the change. The principal bass couldn’t hear the discussion from the back of the stage. She had someone tap me on my shoulder to ask me for the correction. I stood up and turned around so could be heard. When I sat back down Shirley said stridently, “Don’t you ever do that again!” My face turned the color of the aforementioned scarf. Everyone heard the exchange. The cello section could hardly stand the suspense, eager for my reaction.

At the break I leaned over to Shirley and began by saying, “Shirley we are friends aren’t we?”
“Well, yes, of course…why…” she stammered.

“I know I am new and not familiar with the codes of behavior in an orchestra. Since we are friends, I hope that you will clarify the rules quietly and in private so I don’t inadvertently offend anyone or interrupt a rehearsal.”

The cello section silently cheered. She never did that again!

Rehearsal times, works and the order were announced ahead of time but changes sometimes occurred. At rehearsals the finalized schedule was posted on a large bulletin board. The upcoming program beginning on a Monday morning was the exceedingly difficult Mahler Symphony No. 5. I had to work on it! Shirley had finally gained enough trust in me to allow me to take the music—her music—home for the weekend. There was a rehearsal for a different program on Sunday.

I arrived Sunday in plenty of time to warm up. A quick glance at the bulletin board made my heart pound. The Mahler was on the schedule. I hailed the librarian. Nope, there was no extra part. As I donned my coat I hurried over to confess to Shirley, mumbling that I could get the music from my apartment and be back in time. Her look of disdain said it all. Just as I was about to exit the building I turned and saw Shirley practicing the Mahler. Remember her big black bag? She always carried photocopies of all the parts.

But when it came to the solos in the repertoire like for example, the cello solo from Shostakovich Symphony No.1, Shirley would make you cry with her warm, luscious sound and soulful playing. I tried hard to emulate her and I learned a great deal.

We sat together for only one year before she retired. Shirley invited me over to her home—a privilege in itself—and after giving me several of her prized house plants she told me that sitting with me as her stand partner had been one of her best years in the business.

Here she performs in the Lyric Trio with her husband Arthur Tabachnick who was the concertmaster of the Indianapolis Symphony during the time I was there.