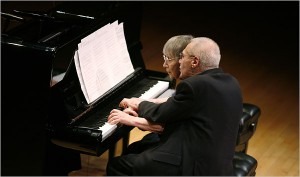 For the Hungarian composer György Kurtág, who celebrates his 90th birthday in 2016, two women have played a pivotal and decisive role in his personal and professional life. During his studies at the Ferenc Liszt Academy of Music in Budapest in 1946, he met the pianist Márta Kinsker. The couple instantaneously understood that they were soul mates, and they married in 1947. Since then, their lives have been inseparably intertwined. Márta gave birth to their son György Jun., and she also became the first listener and critic of his compositions. And of course, to this very day, husband and wife are still publically performing together. The second woman with tremendous influence on György Kurtág was the psychologist Marianne Stein. During his brief stay in Paris in 1957, Kurtág suffered from a severe and debilitating depression. “I realized to the point of despair,” he remembers, “nothing I had believed to constitute the world was true…” Stein, who specialized in treating artists, gradually alleviated the crisis that had paralyzed Kurtág’s creativity for years. She instructed him to approach composition as a process, initiated by the simplest gesture, which only gradually leads to higher levels of complexity. His meeting with Stein, according to Kurtág, divided his life into two halves. “She gave me a new lease on life, so to speak.”

During his year in Paris, Kurtág not only met his psychologist, he also attended courses with Olivier Messiaen and Darius Milhaud. And equally important, he discovered the music of Anton Webern. The String Quartet he composed in 1959 upon his return to Budapest marked this crucial turning point in his compositions. He referred to the work as his true Op. 1, and unsurprisingly, it is dedicated to Marianne Stein. Like Webern, Kurtág became a master of conciseness, “addressing humankind’s predicament of living in a fragmented world.” This highly original work, which combines Webern’s sparseness of utterance with Bartók’s rhythmic energy, immediately identified Kurtág as a significant composer. Despite its fragmentations, the composition nevertheless “embodies the integrative energies, which constitute the essential power of music.” As the French literary scholar and theological modernists Henri Brémond wrote, “From a negative that is unsayable to a positive that is ineffable is a distance as vast as that between blind shadow and transparent night, or between silence that is mute, throttled, and silence that is tacit, for music takes root in the distant rumor of pianissimo, the border of silence.”

Unlike a number of his contemporaries, Kurtág decided to remain in Hungary after the “Hungarian Uprising.” He worked as a pianist, chamber music teacher and vocal coach, but he was comparatively little known outside his homeland as a composer. His international reputation took hold in the early 80’s, aided by changing political circumstances and the fall of the Berlin Wall. He has since been invited as composer in residence at the Berlin Philharmonic, the Vienna Konzerthausgesellschaft, and the Ensemble InterContemporain. “While other composers have sought to find their place in avant-garde musical tribes, or court public attention, Kurtág has stayed inimitably himself, composing short, very private pieces, often just two or three minutes long, that are reluctant to give up their secrets.” Kurtág continues to compose, and together with his wife Márta, still appears on the concert stage. Going back to their early days of courtship, they still play his 4-hand transcriptions of J. S. Bach. Such is the power of music and of love!