Artists Behind the scenes
The Kreisler Scandal
by Georg Predota July 23rd, 2017 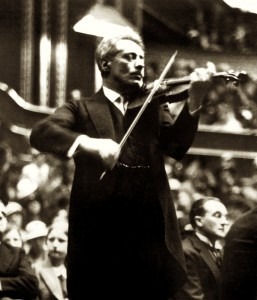 In the early part of the 20th century, Fritz Kreisler was considered one of the leading violinists of his time.

Extraordinarily talented, he started his musical studies at age 4, and was admitted to the Vienna conservatory at age 7. He took violin lessons with Hellmesberger Jr., studied theory with Anton Bruckner, gave his first public performance at age 9 and graduated at 10! After further studies at the Paris Conservatory — violin with Massart and composition with Delibes — Kreisler embarked on an exceedingly hyped but less than successful concert tour of the United States. So he came back to Europe and abandoned music in favor of a career in medicine, and he also served as an officer in the Austrian army. Yet eventually, he returned to the concert stage and his appearance as soloist with Arthur Nikisch and the Berlin Philharmonic on 1 December 1899 launched his international career.

Kreisler performed to critical acclaim and huge popularity around the world, and Elgar composed his Violin Concerto for him. Kreisler was at the vanguard of the emerging music recording industry, and he delighted audiences with performances of lost classics by famous composers. According to Kreisler, he personally had discovered manuscripts of unknown compositions by Corelli, Pugnani, Vivaldi, and Couperin in a French monastery. Audiences would flock to Kreisler’s solo recitals to hear yet another unknown masterpiece, and these lost classics quickly entered the repertoire of other performers as well.

On Kreisler’s 60th birthday on 2 February 1935, the New York Times music critic Olin Downes sent him a telegraph wishing him a happy birthday. He jokingly asked if he himself was actually the composer of all those “lost classics” that had made him so famous. To his surprise, Kreisler unapologetically confirmed that he had been the composer all along. The music industry was outraged, probably because they had ever so willingly allowed themselves to be deceived. Kreisler pointed out “that should make no difference who wrote the works as long as people enjoyed them. The name changes, the value remains.” Clearly, audiences agreed with Kreisler’s assessment as his popularity skyrocketed following the scandal.