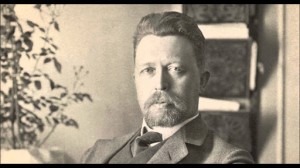 Wilhelm Petersen-Berger (1867-1942) was a feared and controversial music critic for a Stockholm newspaper from 1896 to 1930. He hated the music of Arnold Schoenberg and his followers, and fought tooth and nail against the increasing influence of modernism in music.

According to Petersen-Berger, Sibelius’s first symphony reflected “a moribund, shoddy bohemianism,” and his piano compositions were “Half-talented ravings kept going by local patriotism and political sympathy.” In fact, he forcefully argued that supporters of musical modernism needed help, “not in the form of scholarships and public institutions funded by the public, but through careful psychological treatment to get rid of restraints and a rehabilitation to a social environment.”

Declaring the modernist composer insane did predictably not make him a lot of friends! Petersen-Berger was not only a fearless critic; he was also a capable composer. He initially studied at the Stockholm Conservatory, and later furthered his musical education in Dresden. His oeuvre includes 5 symphonies, an opera and a light festive musical comedy set in 17th century Uppsala. He also penned about eighty songs, but is best known for three albums of romantic piano pieces entitled Frösöblomster I, II and III (Flowers of Frösö). These sets were composed over a period of 18 years, and reflected the nationalistic romantic vein of its day. Among them is a short miniature entitled “Lawn Tennis.”

With the rise in popularity of the sport in the late 19th century, tennis and music soon began to make a match. And Petersen-Berger’s appears to be the oldest European composition to be dedicated specifically to the modern form of the game. In fact, the composer built his personal tennis court on his property, and according to contemporary witness accounts, hosted King Gustav of Sweden for friendly matches.

One of the early ambassadors of the game of tennis to Sweden, the listener might be hard pressed to find a connection between the game of tennis and the music. However, some listeners claimed to have detected “an exchange of strokes in the opening bars.” I think, I better let you be the judge of that.