‘The relationship with the moment’

A stint concerts of improvisation with the Iranian zarb quickly precedes an evening of Bach Cello Suites and Haydn Concerti – this does not phase cellist Jean-Guihen Queyras, who is one of those people who just seems to be very good at everything.

Born in Montreal, Jean-Guihen moved to Algeria aged five, and then on to France at the age of eight – ‘so that prepared me for the musician’s life – travelling a lot!’ He also cites his exposure to other cultures from an early age as playing a large part in his diverse musical tastes.

When he came to Provence as a child, he met the Chemirani family, of aforementioned zarb fame. ‘They started playing music when I started, they started playing Iranian percussion, the zarb, and there were many occasions to hear them and talk about it.’ The friendship formed from childhood became a professional collaboration – and something that also fed into Jean-Guihen’s classical studies.

‘I definitely believe what it has brought me is to be a bit more daring as far as improvisation is concerned. I will definitely stay a ‘crossover guy’ – I am very aware that I would never approach what a professional improviser can do! – but now when I play my cadenzas in classical concerti I dare a little more. It’ll always be my cadenza, but maybe before they were 100 percent settled, and now I dare to have some variation, to add some things, to develop.’ 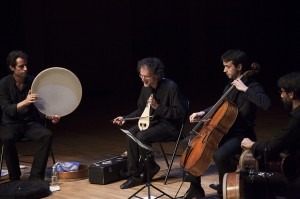 ‘In a more subtle way it’s the relationship with the moment, with the stage, with listening to what’s happening in your interpretation – what do I have to do now so that the interpretation makes sense, lives, goes on? You have to be very active in that, and improvising has helped me to better develop my senses for it.’

Needless to say, Jean-Guihen is renowned for his versatility as an artist. Whilst working in the Paris-based Ensemble Intercontemporain with Pierre Boulez, he was not afraid to pop along to Freiburg and record the Haydn concerti with the Freiburg Baroque Orchestra, which now are hailed as definitive recordings of the works.

‘My generation was perhaps the first one where it was less expected that you would be ‘specialised’. While I was at the Ensemble Intercontemporain I was intensely involved there, but as I went back to meet my former student colleagues from Freiburg, I don’t remember anybody saying ‘what’s this guy doing coming back?’. Fifteen years earlier it would have been different.’

In his teaching post at the Freiburg Hochschule, Jean-Guihen tries to pass this message on to his students who are themselves auditioning for orchestral positions. For him, staying true to your artistic principles and embracing versatility is more important than playing how you think others want you to play.

‘Nowadays orchestras want people who bring artistry and spirit to the ensemble, and not just technical skills. I would think that even on the pragmatic level, the more that I encourage the imagination of my students, the better they play, rather than just saying ‘play louder here.’

‘Times change. Probably in a few years I’ll be the old guy who doesn’t know what’s going on! Maybe it’s already started and nobody told me!’ he laughs.

I ask what he gets up to in his rare moments of downtime. He says, ‘My first hobby is… let me show you.’ He carries his laptop to the window and spins it around, revealing a stunning view of the Black Forest, which is now a mere five minute walk from where he now lives in Freiburg with his family.

‘I grew up in the countryside, so that’s something that I really need. I go for a walk, I go with my bike, to feel nature. When I’m on holiday with my kids we often go to the mountains. That’s my first hobby.

‘Then I’m crazy about great food – although I don’t really cook myself. This is one of the things that makes being on the road really worthwhile. I find food something really cultural. It’s a wonderful way to mix culture and the senses.’

Jean-Guihen also likes books, but doesn’t have a lot of time to sit and commit. ‘Let’s say it’s a wish I have for the coming years. It’s not only something that’s great, but this process of having to stop, sit down and give time to something, it’s something that is a good balance to our modern life.’

Jean-Guihen’s concert in Hong Kong pairs Haydn’s classic first Cello Concerto with a new work, Thoms Larcher’s Ouroboros, premiered in Amsterdam in 2016. The pairing reflects Jean-Guihen’s eclectic artistic personality, and he is looking forward to presenting the new with the old: ‘It has been received very warmly by orchestras and audiences wherever we played it. It’s always a challenge with a new piece, but I think it has a chance to enter the repertoire and be played many times.’

Tickets for Jean-Guihen’s concert can be found here.