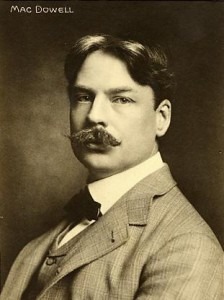 The American composer and pianist Edward MacDowell (1860-1908) was one of the best-known American composers at the turn of the 20th century. He started studying piano early and by age 16, his mother had taken him to the Paris Conservatoire. After 2 years there, he went on to further study in Germany: from Stuttgart to Wiesbaden and finally Frankfurt. At the encouragement of his composition teacher Joachim Raff, he sent his Erste moderne Suite, Op. 10, to Liszt who not only recommended the work for performance at a meeting of the Allgemeiner Deutscher Musikverein in 1882 but also for publication by Breitkopf & Härtel. Thus MacDowell’s career began with a bang.

Although best known for his orchestral works, concertos, and piano miniatures, he also wrote songs, both for solo voice and for multiple voices (part songs). As befitted his international education, his choice of poets varied from Shakespeare to Heine, William Dean Howells to Robert Burns, and From Goethe to his own works.

His main song output occurred in the 20 years between 1883 and 1902 and over that span of time, his style changed from a Germanic style (as influenced by Raff), which struck some listeners as similar to early Richard Strauss, to a more minimalist style in his later years.

One of his first song works was his Heine settings, Op. 11, composed in 1883, which have a prominent piano part.

MacDowell: 3 Lieder, Op. 11: No. 2. Du liebst mich nicht (You Love Me Not) (Steven Tharp, tenor; James Barbagallo, piano)
For his Op. 26 songs, set in 1887, he used the poetry of Margaret Wade Deland that had just appeared the year before. Already we hear the change in the role of the piano – it’s now more supportive and has less of a soloist’s voice. 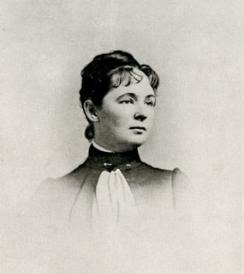 MacDowell: From an Old Garden, Op. 26: No. 2. The Myrtle (Steven Tharp, tenor; James Barbagallo, piano)
His Op. 33 songs come from a variety of literary sources, but it is his setting of Goethe’s Idylle that most strikes us – the piano is reduced to a simple staccato accompaniment while, above it, the singer sings a contrasting extended vocal line.

In 1890, his collection of Eight Songs, Op. 47, appears and with it two of the songs that became his best known: The Midsummer Lullaby, and The Sea. The Midsummer Lullaby is styled after a poem by Goethe, but it is his setting of William Dean Howell’s The Sea, that shows us how far MacDowell’s style has come in just 7 years. The piano is sometimes a support and sometimes colour behind the increasingly subtle vocal setting.

MacDowell: 8 Songs, Op. 47: No. 7 The Sea (Steven Tharp, tenor; James Barbagallo, piano)
By the end of his song-writing period, his Three Songs, Op. 60, of 1902, show both his ability to write beautiful lines and his new skills in making his music thoughts concise and to the point.