I chat with István Várdai when he is in Helsinki, after a long tour of concerts across China and Europe. He continues his travels to Hong Kong on 5 November, playing a recital with pianist Sunwook Kim.

Born in Hungary, István has earned a reputation as one of the most prominent soloists of his generation, his successes in numerous international competitions culminating with a first prize at the prestigious ARD competition in 2014, leading to engagements as a soloist all over the world.

Luckily, István enjoys the travelling – last year he was on the road for a total of 290 days. ‘I love it,’ he explains, ‘but when it gets too much, I can feel it in my body, that my body doesn’t like it so much.

‘The physical part isn’t enjoyable if it’s too much, but I love to visit new places, I love to experience new sensations, new flavours, new smells, and different energies, cultures and vibrations all around the world. It’s a very important part of making music and making art.’

István is a Professor at the Mannheim Hochschule, and is a big believer in education being a two-way street. ‘Teaching is part of my inner artistic balance,’ he says. ‘Teaching is like a mirror for yourself, for the information you think works or doesn’t work. It gives you a lot of feedback.’

‘It’s a bit like planting and harvesting. The harvesting is important for the audience, but the planting is also important!’

Both of István’s parents were pianists, and he was surrounded by music in his hometown of Pécs, Hungary, where his parents built up the music education scene there for many years. István didn’t start to play the cello until he was 8 years old, but his immersion in a musical family, coupled with a solid foundation of music education in the form of the Kodály method, helped pave the way for when he eventually picked up the instrument. 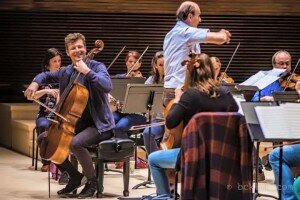 ‘My father conducted a choir, and I would always attend the rehearsals, after kindergarten and after school, although until I started to play the cello, I was just a normal child with a lot of music around. My parents never pushed me to start very early; everything was just what I wanted to do. When I started to play the cello it happened quite quickly, probably because I already had a lot of music around me beforehand.

‘Thanks to my earlier education I was already thinking quite systematically about music, and it made it much easier to connect the physical part of the playing to the musical part.’

And what made István choose the cello? ‘It was the sound, the resonance which I could feel in my body, on my chest, when I tried it,’ he states. ‘It was also register of the sound. I used to listen to choirs a lot, so the violin was a little too high for me, and the piano was a bit too obvious because both my parents played the piano very well!’

Although István doesn’t have much time in between travelling from one city to the next, he would like to make time for his other hobbies – and aim for one thing in particular. ‘At the moment, I would love to do more of other things. Besides visiting cities and trying to squeeze in as much sightseeing as possible, I enjoy cooking when I’m at home, and maybe trying some nice red wines,’ he chuckles. ‘In the future, I would love to get a sailing licence, so I can bring my class and my family for a little journey here and there.’

Details of István’s concert can be found here.