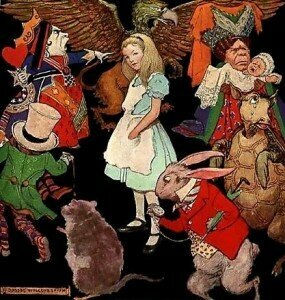 Alice’s Adventures in Wonderland, the genre-changing 1865 novel by Lewis Carroll, takes us to a world populated by talking animals who pose questions of logic and behave in ways that make 7-year-old Alice question the sanity of it all. Characters such as Alice, the White Rabbit, the Mad Hatter, the Cheshire Cat, and the Red Queen who shouts “Off with her head” at all and sundry who cross her. 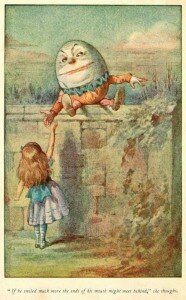 Throughout both books, Carroll added a number of poems that were themselves clever parodies of well-known poems that children would have memorized in the mid-19th century. All in all, the books were a delight for children and adults alike – the children loved the story and the adults loved solving the somewhat disguised references to current politicians or people known to the Oxford circles around Lewis Carroll.

In large works, Alice inspired composers to create operas (Unsuk Chin, Will Todd,), ballets (Przemysław Zych, Carl David, Alexander Rosenblatt, Herbert Baumann), and symphonic works (Louis de Bernières, Deems Taylor, Alfred Reynolds, and many others). One of the most famous of the modern composers who took up Alice was the American composer David Del Tredici. 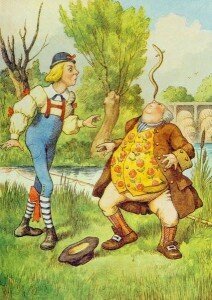 Father William balancing an eel on his nose (Tenniel)

Del Tredici’s Alice inspiration lasted for some 25 years, from his first work, Pop-pourri in 1968, through Vintage Alice, Final Alice, An Alice Symphony, Adventures Underground, Child Alice, and Heavy Metal Alice, to name just the highlights. His last Alice work was Cabbages and Kings in 1996.

Del Tredici: Heavy Metal Alice: III. Apotheosis (Brass Ring)
His song, ‘In Memory of a Summer Day,’ part of the Child Alice cycle, was awarded the Pulitzer Prize in Music in 1980.

The Cheshire Cat and just a smile (Smith)

American composer Irving Fine set the poem ‘Father William’ to music. The poem is a parody of Robert Southey‘s 1805 poem ‘The Old Man’s Comforts and How He Gained Them,’ a didactic and pious questioning of an old man by a young man about how he came to old age so hale and hearty, so happy and cheerful, to which the old men tells the boy to not to abuse his health, to think of the future, and to remember God. In Carroll’s poem, however, the old man stands on his head because it won’t harm his non-existent brain, does somersaults as the result of an ointment that keeps him limber, he can eat everything because he was a lawyer and argued each case with his wife, giving his jaw great muscular strength. In response to a last question about balancing an eel on his nose, he loses patience and threatens to kick his questioner down the stairs. A very different reason for his abilities!

Japanese composer Takashi Yoshimatsu took up the problem of the disappearing Cheshire Cat in his piano and percussion piece. 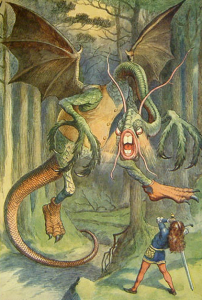 The Jabberwock, with eyes of flame, | Came whiffling through the tulgey wood… (Tenniel)

Yoshimatsu: Partita a la Cheshire Cat, Op. 94, “Cheshire Cat Returns” (Takako Yamaguchi, percussion; Minako Koyanagi, piano)
American composer Deems Taylor took the second Alice book as his inspiration for his 1919 orchestral suite, Through the Looking Glass. Its center piece is the fearsome Jabberwocky, with its ‘jaws that bite’ and ‘claws that catch.’ Defeated by the ‘beamish boy,’ who appears with a spritely melody, defeating the Jabberwocky, who dies in a bassoon solo.

Taylor: Through the Looking Glass, Op, 12: No. 3. Jabberwocky (Seattle Symphony Orchestra; Gerard Schwarz, cond.)
Alice provided a wealth of inspiration for composers from the 19th to the 21st century. How has she inspired you?