Artists Behind the scenes
Ignace Tiegerman: The Lost Legend of Cairo
by Georg Predota March 26th, 2019 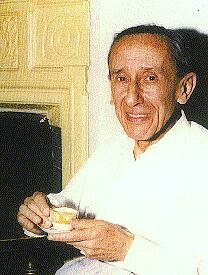 Vladimir Horowitz identified him as the only rival he ever feared, and Ignaz Friedman called him “the greatest talent I ever worked with.” Not to be outdone, the author and literary scholar Edward Said privately suggested, “Despite later music studies with five eminent pedagogues at The Juilliard School and in Boston, all rolled into one, they didn’t equal Ignace Tiegerman’s pinkie.” Given such glowing accolades, how is it possible for such an exceptional pianist and teacher to simply disappear from the radar screen? Well, thanks to the meticulous research of sound archeologist Allan Evans—founder of the Arbiter Recording Company, currently known as “Arbiter of Cultural Traditions,”—the legacy of the artistry of Ignace Tiegerman (1893-1968) has not only been restored, but also preserved for posterity. Tiegerman hailed from the Polish city of Drohobycz and started piano lessons at age four. At the age of ten he became a student of the famed Theodor Leschetizky, and he played his formal debut on 31 October 1908. When a noted Leipzig critic heard Tiegerman perform in 1913, he called him “the pianistic hope of the recent generation, perhaps the most shining.”

But how did Tiegerman end up in Cairo, of all places? Tiegerman had always been of small stature, and his health had always been delicate. In fact, he was long suffering from chronic bronchial asthma, and the European climate just didn’t agree with his condition.

He first considered moving to the United States, but on his 1928 visit to New York he found the “crowded streets so unnerving that he hid inside a phone booth until rush hour had subsided.” He certainly was not impressed by the American way of life, once telling a student, “they expect me to pay in order to play concerts.”

But Tiegerman had other options. The exiled European pianist Joseph Berggrun, a friend of composer Arthur Rubinstein, had lent his name to the music Conservatory of Cairo. Yet, on the eve of celebrating its 10th anniversary, the school was failing and Friedman urged Tiegerman to take control. Tiegerman departed for Cairo in 1931, and eventually changed the name from Berggrun to Conservatoire Tiegerman. He hired professors for violin, piano, harmony, and solfège, and public concerts served as official examinations.

The “Tiegerman Conservatoire,” established at No. 5, Rue Champollion quickly became an important musical center in Cairo, and Tiegerman attracted the best and brightest pianists in the area. Among his students was Hassan Aziz Hassan, one of the last surviving members of Egypt’s royal family. 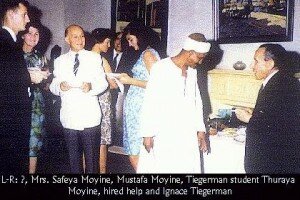 Prince Hassan relates, “I was privileged to come into contact with a person whose personal merits remain for me a wonder of human realization… He had an indomitable spirit and enormous pride and dignity. It was extraordinary to hear all the different emotions that came pouring out of his superb piano playing, but which were always tempered by his perfect sense of style and taste… To those that have known him he has become something of a cult, and when they meet they feel a bond in common like people who have undergone a great experience together.” By all accounts, Tiegerman was a ferocious teacher who taught primarily by demonstrating. “He demonstrated to you how the piece you were preparing should sound, and if you dared argue, all he had to do is show you the score and the notations by the composer, and that was that.”

When the ominous clouds of war started rolling in, Tiegerman departed for a 12-month stay in the Sudan before returning to Cairo. With the 1952 Revolution gathering steam, Tiegerman was invited to move to Israel, but he remained in Cairo within his extended circle of students—who were Moslem, Coptic and Jewish Egyptians, Greek, Italian, French, Armenian, Syrian, and Lebanese—and friends, who had become his extended family. 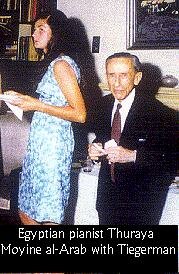 Tiegerman played his final concert on 1 June 1963, and he passed away following prostate cancer surgery in 1968. No commercial recordings existed of Tiegerman, but Arbiter Records have reissued and restored privately recorded and radio sessions of Tiegerman’s pianistic mastery under the title “Ignace Tiegerman: The Lost Legend of Cairo,” and all musical Youtube excerpts in this article come from that special recording. Paris based Henri Barda, possibly Tiegerman’s finest student not only credits his teacher with “having guided him to find his own musical language,” but also recalls Tiegerman’s reaction to less than prepared students. “Often his studio door would swing open, the music would fly out, soon followed by the student.” Tiegerman, as exemplarily unearthed and researched by Allan Evans, was not only a significant arbiter of cultural traditions, but also the undisputed “Chopin of the Nile.”