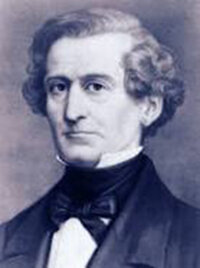 Hector Berlioz was particularly fond of poking fun at so-called musical critics who had neither the education nor the natural ability to pass judgment on a composition. Of course, he had been mercilessly criticized for “his strange composition consisting of nothing but noise, disorder, a sickly and sterile exaltation… Berlioz, musically speaking, is a lunatic; a classical composer only in Paris, the great city of quacks. His music is simple and undisguised nonsense.” Always willing and happy to expose incompetence at any level, Berlioz decided to play a little trick on his “esteemed” colleagues. Berlioz had been toying with the idea of writing an oratorio based on the Holy Family’s flight into Egypt. And the idea for his L’enfance du Christ (The Childhood of Christ) originated with a short organ piece he wrote for his friend Joseph-Louis Duc, called “The Shepherd’s Farewell.” Berlioz turned it into a choral movement with the shepherds saying goodbye to the baby Jesus as he leaves Bethlehem for Egypt. 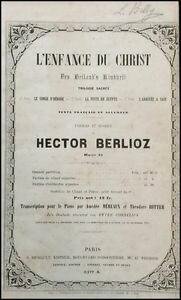 On 12 November 1850, Berlioz had the chorus performed with the composer credit given to an imaginary 17th-century composer named “Pierre Ducré.” Berlioz even came up with a backstory, naming Ducré as the forgotten but brilliant music master of the Parisian church Sainte-Chapelle back in 1679. Berlioz told the press that this particular work was written on ancient parchment and discovered behind a wall during the restoration of the Sainte-Chapelle, when the demolition of the wall revealed a hidden music cupboard. Berlioz also explained that the work had been written in archaic notation which he’d had terrible trouble deciphering! The critics absolutely love it. They praised him for uncovering such a valuable masterpiece, and a particularly caustic critic of Berlioz’s music wrote, “Berlioz would never be able to write a tune as simple and as charming as this little piece by old Ducré.” As you might well imagine, Berlioz was greatly amused by the wave of admiration for the fictitious Ducré. He quickly confessed his subterfuge, but the ruse assured that the oratorio received unanimous approval from music critics far and wide.