André Previn, the remarkably versatile German-American pianist, composer, conductor, jazz musician and presenter, who died on 28 February 2019 at the age of 89, was an iconic figure in the national consciousness, and significant to me personally in my own musical and cultural upbringing. 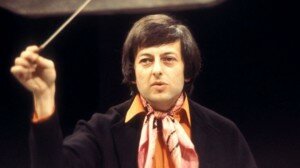 There was always a lot of music at home when I was growing up – on the radio, on LPs and, significantly, on television; so much in fact that classical music felt like a normal part of the day-to-day cultural landscape of the 1970s and 80s. As a family, we enjoyed André Previn’s programmes on the BBC where, with the London Symphony Orchestra (LSO), he introduced works from the classical repertoire in a way which was engaging, informative, intelligent – and accessible. The orchestra eschewed their usual formal attire of white tie and tails, as did Previn as conductor, often sporting one of his colourful silk neck scarfs, and in this more relaxed setting, Previn introduced the great works of the classical canon in a way which was comprehensible to the lay listener, yet never simplistic. In his ‘André Previn & Friends’ programmes, Previn was joined by musical friends and acquaintances who performed music together and talked about it in a casual yet informed way which allowed the viewer to get beyond the notes and revealed insights into the life of a classical musician. In 1971, Previn even appeared on the very popular Morecombe & Wise show (introduced as “Mr Andrew Preview”) where he gamely played along with Eric Morecombe’s famously inept performance of Grieg’s Piano Concerto (“I’m playing all the right notes, but not necessarily in the right order”). It is a mark, perhaps, of just how much classical music was part of the mainstream British culture and consciousness in those days that a leading conductor could appear on a TV comedy show. We have star conductors aplenty – Simon Rattle, Gustavo Dudamel, Marin Alsop et al – but it’s unlikely any of them would ever be invited onto a popular TV show today.

While some critics sneered at his “populist” approach, Previn clearly understood the value of making classical music appealing to a mass audience and television was the perfect vehicle for this. At the height of his television career, the LSO, for which he was principal conductor for 11 years, was playing to packed halls, something many classical musicians would kill for today.

Bernstein: Overture from Candide (André Previn with LSO)
“Bernstein has made it possible not to specialize in one area of music,” Previn said of his idol Leonard Bernstein, who enjoyed similar popularity, and with a background in film score writing for Hollywood (for which he won several Oscars) and jazz as well as classical music, Previn’s great skill, like Bernstein’s, was his ability to segue seamlessly between these different strands of his polymathic career. In doing so he democratised classical music in particular by demonstrating that it was possible to like and appreciate all music, untrammelled by the boundaries of genre or style. And unlike some presentations of classical music on TV today, in his own programmes he never tried to “trendify” it nor patronise his audiences; instead he raised “the public’s awareness of great music and its performance by demonstrating just how great – majestic, magical, exciting, moving – it actually is” (Peter Donohoe, concert pianist).

His greatest achievement was to bring classical music to a wider audience, far beyond the rarefied concert halls, and he did so with humour, eloquence and, above all, huge respect for the music itself.