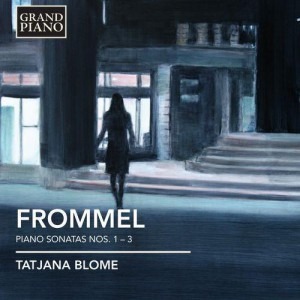 Gerhard Frommel rejected vapid pre-war Nationalism and Schoenberg’s dodecaphony, finding his voice in individuality and tradition. His highly contrasting Piano Sonatas are rooted in a blend of romanticism and the rhythmic propulsion of Stravinsky, articulated with tenderness in No. 1, clownish grotesquerie in No. 2, and sensual impressionism in No. 3.

Gerhard Frommel was born on 7th August 1906 in Karlsruhe. He studied first with Hermann Grabner and then, from 1926 to 1928, attended master-classes given by Hans Pfitzner. He was Professor of Composition at the universities of Frankfurt-am-Main and Stuttgart, among other institutions, and during the war he was active in the Frankfurt Musikhochschule. After 1950, tonal music, including that of Frommel, was regarded in Germany as fascist and was supplanted by dodecaphony and its further developments. Frommel died on 22nd June 1984 in Stuttgart.