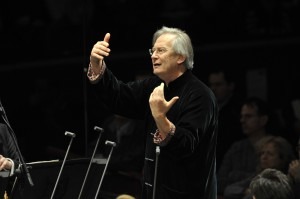 This all-day event at the Royal Albert Hall was a celebration of not one but two creative artists – J.S. Bach, and the conductor John Eliot Gardiner. Gardiner is 70 this year, and this Bach Marathon was principally led by him and his own ensembles, the Monteverdi Choir and English Baroque Soloists. So prolific are these groups both in terms of concerts and recordings that they have become an essential part of European concert life, and it was a great joy to find them at the beginning, middle and end of the festivities, starting the day with an uplifting rendition of the motet Singet dem Herrn BWV 225 and closing proceedings with a radiant, fullblooded Mass in B Minor (soloists drawn from the choir), with a dramatic performance of Easter Cantata Christ lag in Todesbanden, BWV 4. In between, a star-studded lineup of soloists performed some of Bach’s great solo works: Alban Gerhart played the 6th Cello Suite, Joanna MacGregor the Goldberg Variations, Viktoria Mullova the D Minor Partita (with the great Chaconne) and John Butt some of the organ works.

As can be expected from such a programme, the day was full of wonderful performances. Mullova in particular was exceptional, presenting each movement with cool detachment rather than throwing emotion at us, and MacGregor’s Goldbergs were constantly creative and unpretentious. Other heroes of the day were the Monteverdi Choir’s indefatigable bass section (particularly in their extraordinary solo verse of Christ lag in Todesbanden), and tenor Nicholas Pritchard, whose sweetly sung Benedictus was the highlight of the solo numbers in the Mass. Furthermore, the audience were able to join in, having been taught the final choral of Christ lag, Gardiner extracting from the thousands in the hall the same energy and precision delivered by his own ensembles. 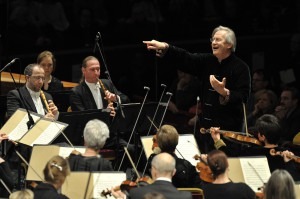 Little to complain about, it seems. Musically, much was exceptional, but as a whole, this Bach Marathon seemed slightly to be running in circles. The day’s peculiar structure – each of the three mammoth 3-hour sessions separated by only half an hour – blended each exceptional performance into a single homogenous whole. Further blending was achieved by an inexhaustible panel of experts who took the stage no fewer than six times throughout the day to profess a range of opinions on Bach the man, though rarely on his music. Such discussions seemed oddly distanced from the music performed around them – in place of insight, analysis and context was simplistic hyperbole, as well as a desire to achieve nothing less than a full psychological analysis of the man based on scanty evidence and pure subjectivity. Descriptions of Bach as the ‘father of music’ do little to further our understanding of his remarkable achievement, while drastically underplaying that of Bach’s predecessors and contemporaries. Even more remarkable was the repeated description of Bach as the ‘father of jazz’, presumably based on a shared technique of improvisation and exciting rhythmic interplay. This idea does a grave disservice to the complexity and subtlety of jazz as well as undervaluing the significance of improvisation in Bach’s music, and the fascinating tension between extemporisation and the written page.

The Bach Marathon was full of consistently exciting and innovative performances. Yet the framing of those performances in such discussion weakened the individuality of each work – if the Goldberg Variations feel just like the next piece in the programme, something is a little awry. This event made me think a lot about the current trend for re-evaluating concert rituals and etiquette. One the one hand, the audience was invited to join in the performance, and was able to wander in and out of the hall. The onstage discussions were chatty, and interdisciplinary, featuring not just musicians but psychologists and neurologists as well. But this informality was somehow at odds with the Royal Albert Hall’s imposing Victorian grandeur, the solemnity and focus of the music (not to mention the concentration required to listen to the hour-long Goldbergs) and the white tie and tails of the Monteverdi Choir. Despite these attempts to break down barriers between audience and performer, it was those parts of the Marathon that felt the most traditional, most like a regular performance, that were the most powerful – the hushed concentration during Mullova’s performance, the standing ovation after the Mass in B Minor, performed without a break and, for whatever reason, with no applause between its gargantuan movements.

In some ways the absence of real focus or purpose behind much of the conception of this celebration of Bach didn’t really matter. We were treated to a feast of world-class music making, full of invention and wit, and left buoyed by the splendour of the day’s final offering. But as we crossed the finish line of the Marathon, we realised we were to some extent still where we began. Without clear questions being asked, discussions of Bach’s psychological profile and potential psychiatric disorders, as well as an excessive triumphing of Bach as an almost godlike figure left us with no real answers, only an incomplete and vague picture of Bach the man, without any clear links to his music. As a single event, the Bach Marathon was a powerful reminder that, though it is of course vital to challenge our own traditions and constantly re-evaluate the nature of performance, with music such as Bach’s it is often wisest to let it speak for itself.