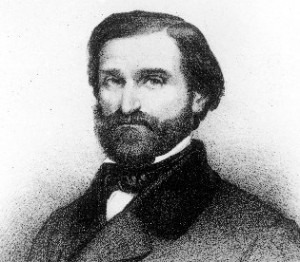 Scholars have suggested that the inherent pathos and drama of Verdi’s operas was the direct result of the composer attempting to cope with the cruel loss of his two infant children and the unexpected death of his wife Margherita in 1840. And death, whether in real life or on stage, was a constant companion for Verdi. More than twenty Verdi characters die on stage, either willfully stabbed, poisoned, shot, suffocated, asphyxiated or in the case of Violetta, die of consumption. In this world of real tragedy and imagined drama, Verdi found inspiration and hope — and ultimately new love — with the soprano Clelia Maria Josepha (Giuseppina) Strepponi.

Aged nineteenth, Giuseppina made her debut as Adria in Luigi Ricci’s Chiara di Rosembergh, and her performance in Rossini’s Matilde die Sharban at the Teatro Grande in Triest in 1835 immediately attracted the attention of music critics. She possessed “a voice that is limpid, penetrating, delicate, a convincing dramatic performance and a graceful figure. In addition to the numerous virtues that Nature has generously given her, there is also that science of singing in which she excels. This same science, in little time, will make her shine among the brightest stars of Italian theatre.” After highly lauded performances in Florence, Venice and Vienna, Giuseppina came to Milan as an exciting international star. Yet the life of an operatic diva in the 1830’s was hardly as glamorous as we imagine it to be. She was expected to sing four or five times a week, simultaneously starring in Donizetti’s Lucia di Lammermoor, Pia de’ Tolomei and L’elisir d’amore, as well as Bellini’s final opera I Puritani. It is hardly surprising that after a couple of short years, Strepponi began to experience significant vocal problems, which eventually forced her retirement from the stage in February 1846. Concordantly, in order to achieve stardom on the operatic stage it was simply not enough to have a beautiful voice; you also had to bed the right people! Upon her return to Italy in 1836, Giuseppina had an affair with the famed tenor Napoleone Moriani, with whom she also shared the stage on multiple occasions. In 1838 and 1839 Giuseppina gave birth, first to a son named Camillino and then to a daughter baptized Giuseppina Faustina, later renamed Sinforosa Cirelli at an orphanage in Florence. It remains unclear whether Moriani was the actual father of Giuseppina’s children, as both children were named after the impresario Camillo Cirelli. In the early 1840’s, Strepponi publicly left Moriani for Bartolomeo Merelli — impresario, librettist and manager of “La Scala” between 1829 and 1850 — and the relationship produced Adelina Rosa Theresia Maria Carolina who sadly died in infancy. 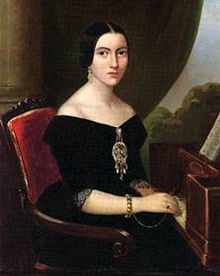 All in all, it made for rather good publicity as it filled the gossip columns on a daily basis. Giuseppina made her “La Scala” debut in 1839 as Leonora in Giuseppe Verdi’s first opera Oberto. During the premier performance of the work Antonietta Marini-Rainieri had sung the role of Leonora, but a smitten Verdi petitioned Merelli to pronounce her unsuitable. The equally smitten Merelli, in turn, hired Strepponi to replace her. Strepponi spoke enthusiastically of Oberto, and everybody agreed that her performance was one of the strongest aspects of the production. In fact, it was probably the main reason the work achieved a fair amount of success in the first place. Verdi in the meantime was seeing Emilia Zeltner Morosini, married to a crusty Count who could easily have passed for her great grandfather. Among the fifteen surviving letters, a single one actually talks about his feelings. Verdi writes, “I am always loving, passionate, on fire, half dead over you. There are so many things I would like to say to you.” Although they remained good friends, nothing serious developed as Giuseppina had caught Verdi’s gaze. However, since she was by now the mistress of the man who held his future as a composer in the palm of his hand, he was initially unable to pursue the affairs of his heart. However, all this changed dramatically during the casting process for Nabucco.