“I’m the lucky one, who can bring the music alive – and this is the greatest joy”

I’ve admired world-renowned violinist Maxim Vengerov ever since I first heard him at the Proms in 1999, when he played a fabulous, varied programme which included Brahms’ Violin Sonata No. 3, Rachmaninoff’s Vocalise, Ravel’s Tzigane, and a selection of glittering concert showpieces, including a spellbinding performance of Waxman’s Carmen Fantasie. It was just him and pianist Vag Papian, on a special stage set up in the arena (promenading) area of the Royal Albert Hall, playing to a packed house. 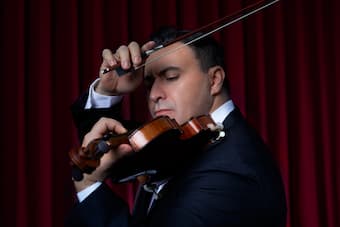 In September this year he returns to the Albert Hall, for a special concert celebrating 40 years on stage – or rather 42 years on stage as this concert, originally scheduled for June 2020, was postponed because of the pandemic. In addition to a celebration of his remarkable performing career, it is, for him, also a celebration of his connection with British audiences. “I’ve been here from right at the start of my career. This is like my second home.” As well as giving many concerts in the UK, since 2016 Maxim Vengerov has been a visiting professor at London’s Royal College of Music.

London was also where he studied with Mstislav ‘Slava’ Rostropovich, an adored mentor and friend, whose name comes up frequently during our conversation.

“I have great memories with Slava, of visiting his home in Maida Vale. Without him I would be a different musician today. He opened my vision for music and he inspired me also to continue and to share music. Not just to be a performer, but to share it. That’s why I became a teacher at the age of 26. I always wanted to make space for teaching, in spite of my busy schedule.”


The two years of the pandemic and lockdowns, and the shutdown of live music, have had a profound impact on the lives of musicians, and for Vengerov, like many others, it was a time to reflect on the demands of the profession. With an empty concert diary, confined to his home with his family and parents-in-law, the first month of lockdown was an “amazing time with family. I’ve never stayed so long with my family…. But after a month, my elder daughter Lisa says, ‘Daddy, aren’t you going away?’. It was the biggest shock of my life! I realised that for my family, I was the father who was always travelling and sometimes coming back. Today it is different; despite my heavy schedule….in my family’s mind and my own, I am the father who is at home and sometimes on tour.”

During lockdown, Vengerov was keen to do something for other people. “It was horrific that we weren’t able to make music, and people weren’t able to listen.” So, as Artist in Residence at ClassicFM, he gathered together a trio and organised a livestreamed concert, an hour of live music, broadcast to some quarter of a million listeners worldwide. This inspired him to continue, to communicate to the world and to share his experience, this time via the medium of interactive online lessons. With the help of a brilliant tech team, he built a platform, created a website and held in excess of 150 free live online lessons with optimal sound and high-quality visuals. These remain in the archive of his website, available to all, while new material is regularly added.

Of this particular lockdown project he says “It was so traumatic to see so many people leaving the profession, but so understandable, because nobody cancelled paying mortgages or bills! But we needed to continue what we feel passionately about and we needed to give some hope. And I did that in my own little modest way.”

Now live music is back and audiences are thrilled to have concerts again “Every venue was full – Elbphilharmonie, Salzburg festival, Carnegie Hall, all amazing experiences! People were crying.” 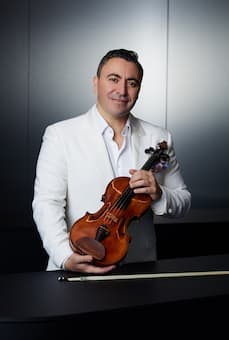 With such a long performing career, how does he maintain the interest, the excitement and the inspiration? “I am never bored!” Vengerov replies immediately, and then goes on to illustrate this point further:

“How many things are involved in the process of making a concert? It requires great preparation, great delivery on stage, great spirit, great instrument [he plays a 1727 ‘Kreutzer’ Stradivari], great hall, acoustically – a wonderful acoustic together with my instrument is always a different experience because my instrument reacts differently to every concert hall and I always play differently in every hall. Then of course partners that I work with, chamber music…. And audiences…they don’t necessarily have to be educated, but they have to be open, and they have to be there for the right reasons, to discover music. And if you’re not in love with the composition you’re performing you should better not do it! There is not a moment when you can be bored….it’s pure enjoyment and pure challenge.”


Away from the concert stage, he draws inspiration from his family and friends, good food and socialising, playing tennis, and walks with his Shiba Inu dog, Toto. And of course the music.

Returning to his forthcoming London concert, we talk about the Shostakovich Violin Concerto, the centrepiece of this concert, and a work which he has played many, many times. The challenge here is keeping the music, and the performance, fresh, and once again the conversation turns back to Slava, and his advice to always play the work as if performing it for the very first time – or “perhaps the last time”. Deep knowledge of the music is important too, and this is where training to become a conductor has helped Vengerov gain crucial insights into the score which inform his performances and lend greater enjoyment and fulfilment. “Once you know the full score, it adds a new dimension to your performance. It’s no longer a violin piece with orchestral accompaniment… you can refer to one or another line in the orchestra and that’s where you draw your inspiration… The impact that the orchestra has on the soloist is vast. And if you’re not part of it, then it’s a different piece.” 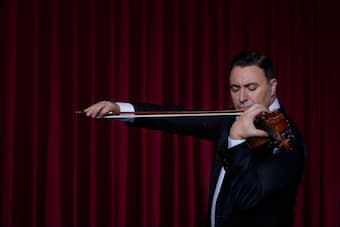 The other major work in this concert is Beethoven’s Triple Concerto, for which Vengerov will be joined by cellist Mischa Maisky and pianist Simon Trpčeski. Too often regarded as a “party piece”, Vengerov asserts that the Triple Concerto is “a most profound work” that requires a very particular relationship between each member of the orchestra and the soloists. The orchestra in this instance is the Oxford Philharmonic, conducted by Marios Papadopoulos, with whom Vengerov has a longstanding association, having shared “so many wonderful things” during his residencies with them. “They are like family members.” Orchestra and soloists will also be joined by students from the RCM for a special arrangement of Sarasate’s Navarra, to celebrate the joy of music-making and music education.

How does it feel to play in such a large venue as the Royal Albert Hall, I ask him, and he replies that it’s important to make the venue “feel cosy”, regardless of its size. He tells me that he encourages students to “play to the last row” when performing at a hall like RAH, to encourage them to think less about volume of sound and more about projection and vibration.

It’s evident from our conversation that for Maxim Vengerov the ongoing pleasure comes from performing and sharing his music to impact people emotionally.

“At the age of 5 I didn’t understand why, but when I played in front of an audience, I understood. It gave it [the music] purpose. I’m the lucky one that can bring it alive – and this is the greatest joy.”

Maxim Vengerov celebrates 40 years on stage in a concert at the Royal Albert Hall, London, on 19th September, with Mischa Maisky, Simon Trpčeski, the Oxford Philharmonic Orchestra and Marios Papadopoulos, and students from the Royal College of Music.