We’ve already looked at violin body design – now let’s look at the other end of the instrument and take a look at a part of a string instrument you’ve probably seen, but never really looked at: the far end of the fingerboard is the scroll.

Scroll design can be individual to the violin maker, but they, in essence, all look similar.

When luthiers started to experiment, however, scroll design could become quite interesting.

In this violin by Jean Baptist Vuillaume (1798-1875), the scroll has been turned into the head of an old man:

The Norwegian violinist Ole Bull’s Gaspar di Salo violin had a headscroll in the shape of a woman’s head, supposedly carved by the sculptor Benvenuto Cellini 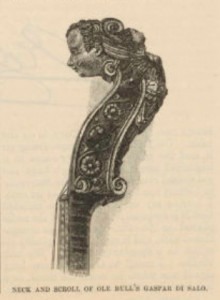 On this cello, the scroll has been delicately cut out and floral designs added: 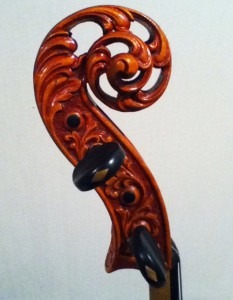 On two modern limited edition solid gold-plated violins, the scrolls have been transformed into death’s heads, with diamonds for decoration and rubies or sapphires for the eyes. These were made by electric instrument-maker Bridge and jewellery designer Theo Fennell. To balance the weight of the gold and jewels, the instrument were constructed from a special carbon and Kevlar blend so that they would be light enough to be played. These were made for the electric violin duo Fuse, who earlier had commissioned Swarovski jewel-encrusted violins.

What’s more common, however, is changing the scroll design into an animal. For some reason, lions are the most common, but other animals, both common (cats) and fantastic (dragons) also appear. 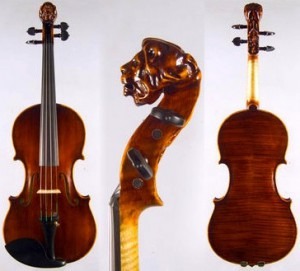 It was based on the design of violins from Middenwald, Germany, that were very common in the 1860s to the end of the 19th century. 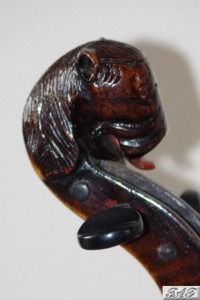 The curled down head of this cat scroll seems both demure and, perhaps, a reference to the sounds that both violins and cats can make when angry! 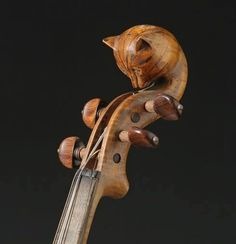 This dragon scroll is very Chinese in design and the imagery is continued downward with the scales.

None of these designs change the essential sound of the instrument on which they appear. Think about the psychological advantage, however, when you’re attacking those high notes and, at the end of your violin, about to nip your fingers is a lion…