The German group Bündnis Mensch & Tier (Alliance for Humans and Animals) has chosen its Pet of the Year: The Donkey. The group points out all the benefits of the alliance between donkeys and humans and closes with the thought: ‘There is no such thing as a stupid donkey, rather the donkey is a mirror of its owner.’

We looked through the classical repertoire to find some Donkey music and, not surprisingly, there was a lot to choose from all depicting a variety of temperaments. 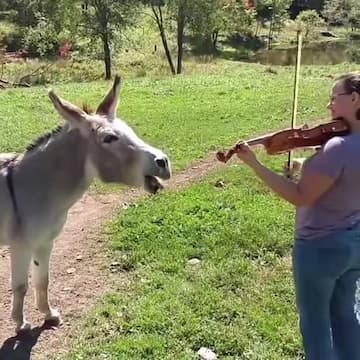 We’ll start with a fable from Aesop, set to music by Elisabetta Brusa. One day a donkey found a lion’s skin, and putting it on, scared all the other animals. Finally, a fox sees through his disguise when the donkey-lion tries to roar, giving us the moral: Clothes may disguise a fool, but his words will give him away. 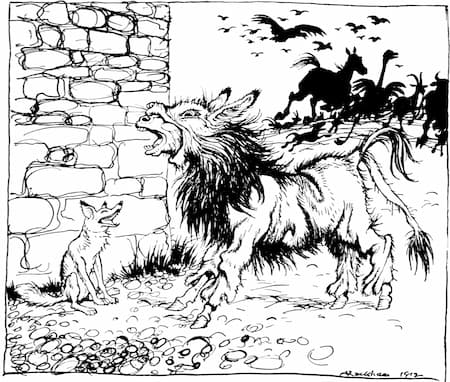 
One of Jacques Ibert’s works that brought him public acclaim was his piano collection Histoires, commissioned in 1922 by his publisher, Alphonse Leduc. This set of 10 character pieces gives us people (The Old Beggar, the Fresh Water Seller), places (In the Sad House, Under the Table), and animals (The Leader of the Golden Tortoises), and The Little White Donkey.


This proved so popular that it was redone in other formats: for piano 4 hands, given lyrics and made into a song, and as a piece for orchestra.


Rudolf Friml’s first operetta, written in 1912, takes as it subjects a young street singer who disguises herself to serve as a cabin boy on a private yacht going to Bermuda. She falls in love, complications ensue, and by the end, she’s a great opera diva. In the film version, now set in Spain where our former street singer is now a singing spy, a new song was added: The Donkey Serenade. The music, however, came from another work by Friml, Chansonette.

First appearing in the collection The Wild Knight and Other Poems, G.K. Chesterton’s poem ‘The Donkey’ was set by over 20 composers. It starts as a poem about the ugliness of the donkey ‘With monstrous head and sickening cry | And ears like errant wings, | The devil’s walking parody |On all four-footed things’ and ends with his hour of triumph, bringing Christ into Jerusalem. Henry Cowell wrote his setting in 1946 for the lyric tenor Roland Hayes. The song was recognized as being extremely difficult for its chromatic setting, but also as being fascinating. Cowell sets the text as Chesterton wrote it: the donkey hides the secret of his ancient triumph and this is beautifully revealed at the end.


As part of his Opus 3, 8 Piano Studies, composer Robert Mansell reserved the last one for ‘The Little Donkey,’ depicting a donkey jogging along a mountain path, until the path gradually steepens, the animal wearies and finally sleeps.


In this 1989 work, Sinfonia Concertante Brasileira, written for flute and orchestra, composer Miguel Kertsman used the image of a recalcitrant donkey loaded down with pots and pans, and refusing to budge down the track. The donkey and his owner are at a stalemate in the Brazilian backlands. The birds sing, the pots and pans clash, and the donkey remains adamant until the end when they all quietly depart.


For his carol recording, The John Rutter Christmas Album, English composer John Rutter gathered together his carols and carol arrangements including the Donkey carol. It tells the story of the donkey who carried Mary, ‘with her heavy load’, to a stable where Jesus is born and closes with the donkey’s dance of joy. It is one of the few carols written in a bright skipping 5/8 time signature.


Set during his student days in Petrograd (St. Petersburg), Dmitry Shostakovich’s 2 Fables of Krilov takes as its source the Russian retellings of Aesop’s and La Fontaine’s fables done by Ivan Andreyvich Krylov. There, under a cover of animal fables, Krylov exposed the abuses of Tsarist society. Although the first song, about ‘the easy-going firefly and the forward-planning ant’ was relatively innocuous, the second story about the donkey and the nightingale is a disguised commentary on the struggle between art and the ignorant. Shostakovich was only 16 when he wrote these songs, but we can hear immediately the contrast between the mezzo’s aggressive setting and hard inflection and the sweetness of the altos of the chorus.


In music, the donkey can be a metaphor of ignorance, of faith, of falsity, of hard work, or of a decided temper and opinion. Join us in the celebration of the donkey as the pet of the year!