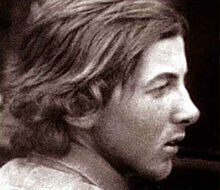 The California Department of Corrections and Rehabilitation State Prison in San Quentin has numerously featured in fiction, literature, motion pictures, concerts, music videos and more recently, video games. It is the oldest prison in the state of California, opening its doors for business in 1852. It has the largest death row in the United States, and until 1996 the noose and gas chamber did all the dirty work. Since then, undesirable male inmates are dispatched by lethal injection. While San Quentin surely housed a fair number of hardened criminals and psychopaths—including Charles Manson and Sirhan Sirhan, who assassinated Robert F. Kennedy—we also find amongst its former guests noted country singer Merle Haggard, who was sentenced to 15 years for grand theft auto and armed robbery. Of course, there were—and probably still are—inmates that did real time for pleading guilty to the accusation of having engaged in a single act of oral sex. And that’s exactly what happened to the American composer, music theorist, pianist, teacher, publisher and impresario Henry Cowell (1897-1965).

In 1936, oral sex—regardless of participating genders—was punishable by up to fifteen years in prison. One sunny afternoon, Cowell engaged with a 17-year old male in his own house who promptly attempted to blackmail him. The local press, rather predictably, had a field day, and Cowell was arrested. At the sentencing hearing, after much discussion on the topic of homosexuality, Cowell pled guilty and was pronounced incurable. Thus convicted, the judge had him committed for 15 years to San Quentin. A somewhat conservative Board of Parole convened after one year and reaffirmed the original sentence. However, in 1938 a new governor appointed a new Board, and Cowell was paroled after spending four years in the slammer. Being banged up, however, did not diminish his appetite for music. He produced over 60 compositions in jail, including two major pieces for percussion ensemble, Pulse and Return, both dating from 1939. In addition he wrote a theoretical treatise and various articles on music. He even gave music lessons to fellow prisoners, and became the conductor of a prison band. Cowell is said to have gained “the respect and admiration of many prisoners alongside the protection of the ranking murderers.”

When the Office of War Information attempted to commission Cowell to create radio programs for overseas broadcast after his release from prison, he could not accept the assignment without a full pardon. Initially, the Governor refused and composers and musicians, including Cowell’s wife Sidney Robertson—a prominent folk-music scholar—took up his cause. The official pardon was issued in 1942, yet the experience of arrest and incarceration had a continued and devastating effect on Cowell. Conlon Nancarrow, who first met Cowell in 1947 reported, “The impression I got was that he was a terrified person, with a feeling that they’re going to get him.” His compositional output became more conservative after his release from San Quentin, and a good number of later works are based on American folk music. Virgil Thomson eloquently summarized Cowell’s artistic impact in the early 1950’s. “Henry Cowell’s music covers a wider range in both expression and technique than that of any other living composer. His experiments begun three decades ago…and today they are the Bible of the young. No other composer of our time has produced a body of works so radical and so normal, so penetrating and so comprehensive. Add to this massive production in his long and influential career as a pedagogue, and Henry Cowell’s achievement becomes impressive indeed.” But you better still be careful! Although US sodomy laws were officially repealed in 2003, 9 US States still outlaw oral sex for everyone!