Composers Inspiration
Dining With Music
by Maureen Buja May 20th, 2022 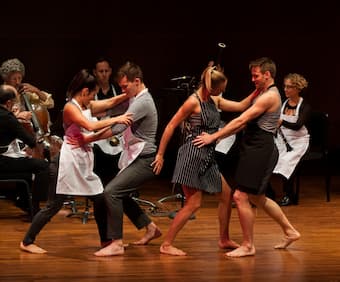 As you peek around the corners of the repertoire, there are a few pieces that reflect the daily concern with Dining. There are works that set recipes, works that show the activities in a kitchen, works that show the procession of the courses, and one that gives you the ambient sound of a large kitchen. Let’s explore!

Martinů’s La revue de cuisine (1927) was still a favourite of its composer some 50 years later. It was a one-act jazz ballet about a love triangle in the kitchen between Pot, Lid, and the adventurous Whisk to which Pot has become enamoured. ‘The forthcoming marriage between Pot (Le chaudron) and Lid (Le couvercle) is jeopardised by the adventurous Whisk (Le moulinet) to whose magic Pot has succumbed. Pot is so captivated that Lid falls off him and rolls into a corner of the kitchen. Now Dishcloth wants to seduce Lid but order loving Broom to challenge Dishcloth to a duel, which delights Whisk. The two irritated combatants fight to the bitter end. Whisk makes eyes at Pot once more but now Pot longs for Lid, but Lid is nowhere to be found. The shadow of an enormous foot appears suddenly and with one kick propels Lid out of his corner. Broom leads him back to Pot, while Whisk and Dishcloth break out into a wild dance of joy.’ Despite this wildly interesting synopsis, the work has rarely been performed as a ballet in its entirety but has had a much more successful life as a suite. One recent version in 2013 moved the scenario to that of a traveling circus. The ballet score was revised and reconstructed by Christopher Hogwood after the full score was found in the Paul Sacher Foundation Archives. 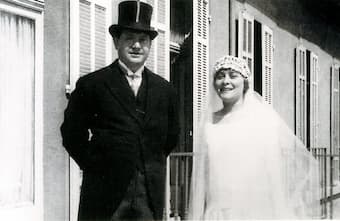 Darius and Madeleine Milhaud on their wedding day, 1925

French composer Darius Milhaud (1895-1974) left France in 1940 when the Germans invaded and took up a post at Mills College in California. One of the changes that the Milhaud family experienced in America was the lack of household help. Cooks and maids were no longer available in war-time America. Milhaud paid tribute to his wife in 1944 in La Muse ménagère (The Household Muse), which recognizes his wife Madeleine’s ingenuity in having to take up household tasks during their time in the United States, where, as Milhaud noted, ‘servants receive higher wages than university professors.’ Her whirlwind kitchen activities are covered in the movement entitled La cuisine. 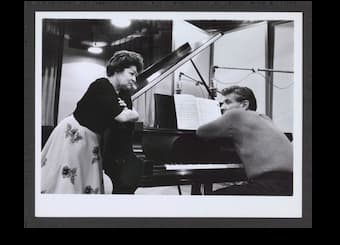 Jennie Tourel and Leonard Bernstein at a recording session, 1960

A ‘song cycle of recipes’ takes Emile Dumont’s 1899 cookbook La Bonne Cuisine Française (Tout ce qui a rapport à la table, manuel-guide pour la ville et la campagne) (Fine French Cooking “Everything That Has to Do with the Table, Manual Guide for City and Country”) as the text source for Leonard Bernstein’s 1947 work. Written for singer Jennie Tourel, it sets the recipes for Plum Pudding, Ox Tail, a Turkish dish of Tavouk Guenksis, and closes with a recipe for ‘Rabbit at Top Speed.’ 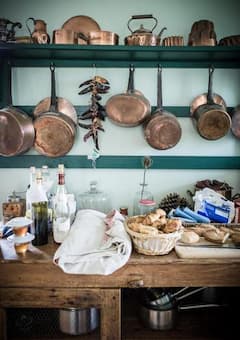 In his 1961 work Grand Concerto Gastronomique for Eater, Waiter, Food and Large Orchestra, Op. 76, English composer Malcolm Arnold wrote a 6-part memorial to a great dinner. Written for the Hoffnung Festival in 1961, the work involved the actions of an off-stage chef and two on-stage actors (the Eater and the Waiter). The Prologue, with its fanfares and ‘comic gestures’ signals the beginning of the action: the Eater and the Waiter enact a ‘ceremonial napkin display’ and the meal is on. The second movement, Soup (Brown Windsor), is both ‘thickly scored and unappealing’, rather like the soup. It is in the third movement, Roast Beef, that the Englishness comes out. The movement may be short, but the performance instructions say that it must be ‘repeated and repeated slower and slower until all is finished’ and the plate of food must be ‘enormous.’ It is the Eater who determines how many repetitions of the march occur – choosing either to gulp everything down as quickly as possible or to savour every morsel, in the manner of Erik Satie’s piano piece Vexations (which 1 page of music is to be played 840 times).


This movement is followed by Cheese, and then the dessert course of Peach Melba and closes with Coffee, Brandy, Epilogue.

English composer Gavin Bryars’ work Cuisine (1993) was written for an installation at Chateau d’Orion, in Orion, France. The music was written to establish the ‘architectural acoustic’ of the space and ‘to animate the spaces in which the music was played.’

We all have our triumphs and failures in the kitchen. Each of these composers has chosen to memorialize something different for their kitchens: love affairs between the implements, the musicality of a recipe, the ceremony of a meal, or just the sound of the space.