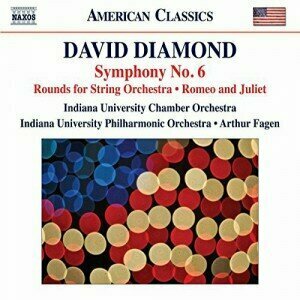 The three works on this recording were composed at the height of David Diamond’s popularity. Rounds is his most enduringly popular piece, whose simple economy of means prompted Aaron Copland to exclaim, “Oh, I wish I had written that piece.” The concert suite Romeo and Juliet explores the “innate beauty and pathos” of Shakespeare’s play. Taking its cue from the work of 19th-century Romantic composers, Symphony No. 6 is cyclical, the second and third movements deriving from material found in the first.