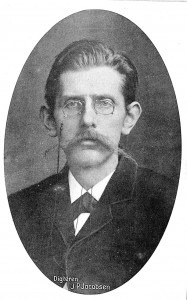 The two big song cycles the Gurre-Lieder and the Book of the Hanging Gardens are actually even larger than normal. Gurre-Lieder is actually a cantata. The title means “Songs of Gurre,” referring to Gurre Castle in Denmark and the songs are about a king and his lover and the lover’s murder by the queen. The poems were by the Danish novelist Jens Peter Jacobsen, as translated to German by Robert Franz Arnold.

Jens Peter Jacobsen (1847-1885) was a botanist and secret poet. His writings, however, were very important to the development of Danish literature. His first important novel, Fru Marie Grubbe (1876), tells of the downfall of a member of the royal family because of her love for a commoner. Many of the themes would appear in later literature in books such as D. H. Lawrence’s Lady Chatterley’s Lover published 50 years later.

The poetry that Schoenberg used comes from Jacobsen’s Gurresang, which was written before Jacobsen turned 21, but it wasn’t published until after his death.

Schoenberg picked up the story in 1898 when he was writing for a competition held by the Wiener Tonkünstlerverein. He completed the work in 1901, but abandoned it when he needed to earn his living. His students took up the work and gradually reengaged his attention: Alban Berg did a piano transcription in 1907 and Anton Webern transcribed 2 instrumental sections for piano 4-hands in 1909. In 1911, Schoenberg finally completed the unfinished orchestration that he’d abandoned in 1901.

It is the song of the wood dove that is one of the most memorable songs in this cycle. The orchestral colour sets off the voice and adds a dark commentary to her song.

Schoenberg: Gurre-Lieder: Part I: Tauben von Gurre! Sorge qualt mich (Voice of the Wood Dove) (Anne Sofie von Otter, mezzo-soprano; Berlin Philharmonic Orchestra; Simon Rattle, cond.)
The Book of the Hanging Gardens, a song cycle completed in 1909, sets the poetry of Stefan George (1868-1933). Unlike the sexual exuberance of Dehmel and Wedekind, George’s poetry returns to an old-fashioned formality. He did not like the current trend in German poetry for realism, seeking instead a more formal and remote style. 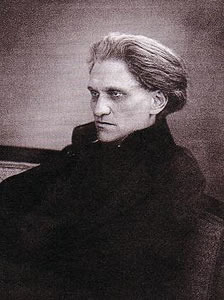 For Schoenberg, The Book of the Hanging Gardens marked the beginning of his atonal period. When the work received its first performance in 1910, it did not meet with much acceptance. However, after the work of Schoenberg and his students, Alban Berg and Anton Webern, received more exposure, the work was reassessed more positively.

George’s poem tells of the doomed love of a man and a woman (George addressed these poems to the wife of Richard Dehmel) who meet in a garden and then separate forever. One of the last poems, Sprich nicht immer (Say no more) equates the ruin of the garden in late autumn with a lost happiness. This is a complete change of style for Schoenberg compared to what we’ve heard before.