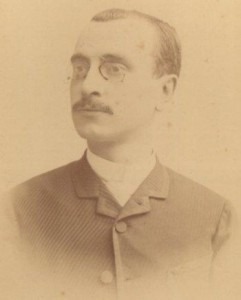 If Gurre-Lieder was a cantata and The Book of the Hanging Gardens a song cycle, then we must separate out one more large cycle for examination. It’s not song as we might recognize it from Schubert and Schumann, but rather a heightened speech, called “Sprechstimme.” Sprechstimme (spoken voice) falls somewhere between singing and speaking. It’s not like recitative in opera, but much more exaggerated. 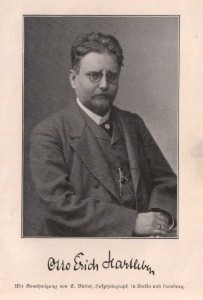 The poetry for the 21 songs of Pierrot Lunaire (Moon-crazed Pierrot) was selected from a 50-poem cycle by the Belgian poet Albert Giraud (1860-1929), that had been published in 1884. The verse form comes from the Middle Ages: a rondeau. These rondeaux are 13-line poems in which lines 7 – 8 repeat lines 1 – 2 and 13 repeats line 1. The repeat of the opening lines at the ends of verses makes us hear those opening lines differently in the changing context. It’s a poetic tour-de-force that demonstrates a fine control of language. The French poems were translated into German by Otto Erich Hartleben and it is that translation that Schoenberg used. In his translation, Hartleben made the language stronger and more forceful than in the French original. He also changed the tense from past to present and altered the flat, unchanging 8-syllable lines into lines of varying metres. Schoenberg went through the poems and selected his 21, grouping them into three cycles of seven poems each. Cycle I is about the poet’s ecstasy (seeing the moon as a symbol of poetry) and artistic rebellion; cycle 2 is about is the poet’s frustration, weakness and despair; while Cycle 3 is about homesickness, a reconciliation with the past, and leaving Venice for his native Bergamo. 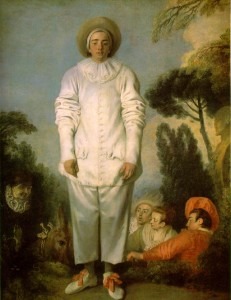 Watteau: Gilles (or Pierrot) and Four Other Characters of the Commedia dell’arte (c. 1718).

Pierrot was a character from the Italian commedia dell’arte tradition. His character is that of a sad clown, in love with Columbine, who is forever leaving him to be with Harlequin. Pierrot dresses in baggy white clothes, sometimes with huge buttons, with a close-fitting cap and a white-painted face. 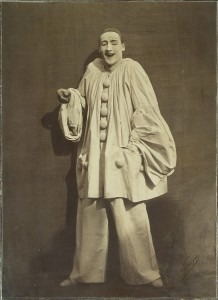 Schoenberg’s use of Sprechstimme was not original to him. It had been used in earlier works, such as Humperdinck’s Königskinder (King’s Children), a melodrama written in 1897. A melodrama was a play where the spoken words were declaimed over an instrumental background. It is thought that the style was imitating popular music of the day. Schoenberg, however, made it his own, using it in works such as the part for the Speaker in Gurre-Lieder; Alban Berg also used it in his operas Wozzeck and Lulu. In Schoenberg’s usage, when a singer hit a note, it was to be immediately abandoned by falling or rising.

We can hear how the styles might differ from singer to singer. In the first recording, Anja Silja gives a very clipped performance, while in the second Jan DeGaetani is more lyrical. In this excerpt, Pierrot, dressed all in black is ready to go out for the evening when he discovers a white spot on his coat. He scrubs and scrubs but it remains and his evening is ruined, all for a dot of moonlight on his clothes. 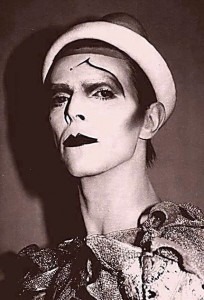