In Tune Arts
Composers and Their Poets: Debussy I
by Maureen Buja January 20th, 2017
Tags: Debussy 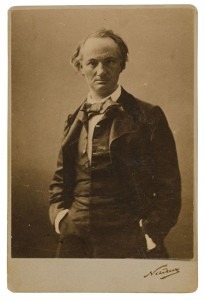 We associate the sound of Debussy with his ‘impressionist’ music of works such as Prélude à l’après-midi d’un faune or his piano music. In some of his most important songs, however, we have more of a Germanic influence, i.e., Wagner.

Claude Debussy (1862-1918) set the poetry of Charles Baudelaire (1821-1867) only once, but it was an important and significant setting. Debussy chose 4 poems from Baudelaire’s book of poetry, Les Fleurs du Mal (The Flowers of Evil). This seminal work, important to both the symbolist and modernist movements, has poems on themes relating to decadence and sexuality. The first edition in 1857 caused both the author and the publisher to be prosecuted for outraging public decency, Baudelaire was fined 300 francs, and six poems were excised from the edition. The second edition in 1861 added 35 new poems and removed the six suppressed poems. The fifth text that Debussy chose came from another collection, Les Épaves (The Wrecks), which also contained the 6 poems removed from Les Fleurs du Mal.

The fourth song of the set, Recueillement, is a long meditation on pain. The poet asks for Pain to be more tranquil now that evening is here. The rest of the world is caught up in the world of Pleasure, but the poet and Pain just wait for the approach of night. Debussy wrote this song in 1889, during his most ‘Wagnerian’ period. He had been fascinated by the music of the German composer ever since he heard the opera Tristan und Isolde, and went to Bayreuth in both 1888 and 1889. The result is music that is more chromatically complex, and melodically challenging than Debussy had produced before.

Debussy only set one Mallarmé poem to music, Apparition, in 1884. It was one of Mallarmé’s earliest poems, written when he was only 20, and celebrating the first kiss he received from his lover (in reality, his wife the next year). Debussy captures that breathlessness of anticipation of her nearness and at the end, as the poet says “j’ai cru voir la fée au chapeau de clarté” (I thought I had seen the fairy with a hat light) dropping bouquets of perfumed stars, the music rises into that night.