Blog
How Amateur Orchestral Players Can Perform At Their Best
by Emily E. Hogstad April 27th, 2017 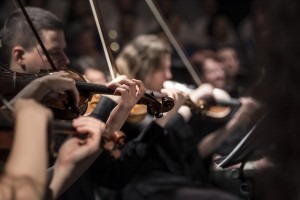 As amateur orchestral musicians, we deal with a lot: constant self-doubt – the gnawing knowledge that we’ll never sound as good as the big boys – balancing learning our music with our full-time day jobs – extremely tiny paychecks (if we get paychecks at all…some of us actually pay for the privilege of being in our ensembles!). And yet we keep coming back. Why? Because for us, playing in an orchestra is a privilege and a special event!

So how can we make the most of our limited time in rehearsal and onstage? How can we guard against frustration and discouragement? How can we play our best?

Here are a few tips I’ve cobbled together during my years as an amateur orchestral violinist and violist. Many of these tips are less about playing and more about how you approach playing: in other words, the prep work and the mental work, both of which are just as important as the physical work!

1. Fortunately, sections of your part that look hard might not be. Unfortunately, the reverse can also be true! A tricky allegro run with lots of accidentals might be easier to brush over than a series of straight repeating eighth notes that need rhythmic precision and are extremely exposed. You may not be able to tell the difference between the “easy parts” and the “hard easy parts” until rehearsal begins. Keep an ear out for those spots.

2. Take advantage of your breaks! As tempting as it is, don’t practice during them. If you need to practice, do it mentally. You’ll be better served by taking a quick walk around the rehearsal room and stretching.

3. If you tend to need pain medication when you play for a long period of time, try timing your dose so it’s in effect during and immediately after rehearsal. A rehearsal spent in pain is not going to be a productive one.

4. If you play a small instrument, don’t leave it on your chair during breaks (even though everyone else will). Carry it in your arms or put it back in its case. Think of it not only as protecting your instrument, but as protecting someone else from the guilt of accidentally knocking an instrument over.

5. Make sure that your conductor is always in your peripheral vision. Sometimes we focus so much on getting in a comfortable position to read our sheet music – especially when we’re sharing stands – that we forget we need to see the conductor, too. Believe it or not, they’re up there waving their arms for a reason!

6. Keep asking yourself: what instrument is supposed to be heard right now? And is that instrument being heard? If it’s not, are you part of the problem? As one of my conductors has said, “I hate to break it to you, but you’re not the melody there.”

7. When things get hard, prioritize counting the beats. It’s much less important to hit every note than it is to hit the downbeat on time.

8. When you’re trying to synch up with your principal, rely on your eyes, not your ears. By the time you hear your principal and then react, it’s too late. This is especially relevant if you’re rehearsing or performing in a space with acoustics that prevent you from hearing each other.

9. Bring multiple pencils to every rehearsal. And make sure they’re at your music stand or under your chair; a pencil in an empty instrument case across the room does nobody any good! One day, one of your colleagues will forget a pencil. And if you’ve prepared, you can be that person’s savior. That way, even if you screw up every single note, at least you’ll be known affectionately as the Prepared And Professional Pencil Person.

10. Never lose your wonder at what an honor it is to play extremely complicated music with lots of other people. Whether you’re satisfied with the standard of your latest performance, take a step back and take pride in what you’ve accomplished. Your group – knit as it is into the very fabric of your community – does something for your city that no Berlin Philharmonic could ever do. After your performance, be sure to treat yourself to a guilt-free night of Netflix, a dinner out, or a new set of strings!

Hopefully these tips give you something to think about at your next rehearsal or concert. As we amateur orchestral musicians know, there’s little else more thrilling in life than playing your best onstage with your colleagues!