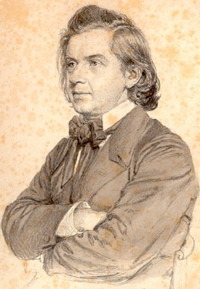 Although the public reception of the works of Niels Wilhelm Gade (1817-1890) was left untouched by political and cultural censorship, he never quite achieved the fame of Felix Mendelssohn and Robert Schumann. Nevertheless, Gade is still regarded as one of the most important progenitors of an autonomous Danish music culture, paving the way for composers of following generations. Gade was an exceptional violinist, and he conducted the world premiere of Mendelssohn’s violin concerto. As such, it is hardly surprising that he set to work on a concerto for violin and orchestra of his own. Composed in the summer of 1880, and issued as Op. 56, his only instrumental concerto is full of virtuoso flourishes and an occasional Danish dance rhythm. The emotional core of the work is located in the charming “Romance,” featuring wide and expansive melody lines.

Niels Gade: Violin Concerto in D minor, Op. 56
Clara Schumann first met Niels Gade during a guest stay in Copenhagen in 1842. She wrote to her husband after a concert, “I would not have guessed that overture was his.” Once Gade moved to Leipzig, Robert Schumann was at first cautiously guarded, but eventually Gade was accepted into the circle of the “Davidsbündler.” In April 1846 Schumann writes in his diary, “I have seldom met anyone with whom I feel in such harmony.” Gade travelled to Leipzig for the premiere of Schumann’s Genoveva in 1850, and Schumann dedicated his Piano Trio in G minor, Op. 110 to him. The Danish composer also features in the Album for the Young, where he is immortalized in the “Northern Song—Salute to G.” and on the album leaf entitled “Goodbye,” when Schumann used his friend’s name over four bass notes: G, A, D, E. Gade also met Johannes Brahms, but the occasion was memorable for the wrong reasons. In 1868 Brahms finished a tour with the baritone Julius Stockhausen with performances in Copenhagen, organized by Gade. At the ensuing party Brahms made insensitive remarks about Bismarck and other delicate political issues, essentially scandalizing his hosts. All remaining appearances were cancelled. The Fantasiestücke for clarinet and piano date from 1864, and almost predictably, the title was chosen by Robert Schumann.

Niels Gade: Fantasiestücke, Op. 43
On the whole, Gade’s music is rather restraint. Foregoing blatant virtuosity and dripping sentiment, his compositions radiate charm and light drama. And by the early 1850’s he had successfully adapted his nationalist musical voice to suit audiences in central Europe. Among his most polished compositions is a set of ten musical miniatures for piano. Published in 1852, the Akvareller (Watercolors) are modeled after the poetic gems of Mendelssohn and Schumann, and they enjoyed great popular and critical success. In fact, Gade composed a follow-up set of five Nye Akvareller (New Watercolors) in 1881, which he eventually published as Op. 57.

Niels Gade: Akvareller, Op. 19; Nye Akvareller, Op. 57
Arguably, Niels Gade made his strongest impact on the history of Danish music with his dramatic work Elverskud (The Elf King’s Daughter). Based on a Danish ballade, from which Gade took portions of the libretto and a number of melodic fragments, the work is scored for soloists, chorus and orchestra and was published in 1854. Critics have called it “the most Danish of all Gade’s compositions,” and it was the most frequently performed concert piece at the Copenhagen Music Society in the 1850’s. The text offers glimpses into the erotic world of the fairies, and features a young bridegroom who is drawn into an elf mound the night before his wedding. Rejecting the advances of the Elf King’s daughter, the young man quickly perishes. Gade was energetic in promoting the genre, and the fusion of Romanticism and Danish nationalism played well with Danish audiences.