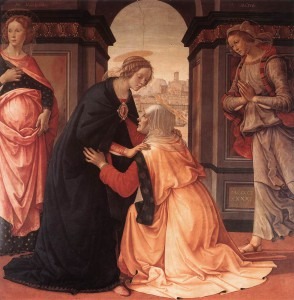 Many passages in the Gospel according to Luke read like poetry. Among the most beautiful chapters is the story of Christ’s nativity and childhood. In Luke 1:46-55, the angel Gabriel has visited Mary and announced that she will bring forth a son whom she will call Jesus, and who will “reign over the house of Jacob forever.” Gabriel also tells her that her cousin Elisabeth, who had been barren, has also conceived a son and is in her sixth month. Mary visits Elisabeth, and when she hears Mary’s voice, the unborn child in her womb—who will grow up to be John the Baptist—leaps with joy. Understanding the significance, Elisabeth greats Mary as “the mother of my Lord.” And Mary responds with her wondrous song of praise for God, which begins “Magnificat anima mea Dominum” (My soul doth magnify the Lord).

Composers have always found this joyous text a rich inspiration. In fact, Orlando di Lasso, one of the most prolific, versatile and universal composers of the late Renaissance, composed over 100 musical setting on that particular text alone. Born in Mons—presently located in Belgium—Lasso readily found work in Italy, but eventually settled in Munich at the court of Albrecht V, Duke of Bavaria. By 1560, Lasso had become rather famous, and composers from all parts of Europe were lining up to study with him. Twice Pope Gregory XIII knighted him, and he received attractive job offers from various musical centers around Europe. Lasso turned them all down writing, “I do not want to leave my house, my garden, and the other good things in Munich.” His musical style, so eloquently presented in his Magnificat settings, is known for intensely expressive settings of texts using extended chromaticism.

Orlando di Lasso: Magnificat
Giovanni Pierluigi da Palestrina shaped his music in a beautifully sonorous way. One of the best-known composers of the Italian Renaissance, he had a lasting influence on the development of church music. Responding to the Lutheran Reformation, the Council of Trent revised a large number of liturgical texts. As a result, there was a great need to rewrite much of the repertoire in the latest musical styles to make it more transparent and closely focused on the text. And Palestrina responded with his smooth and consonant type of polyphony, with dissonances confined to passing notes and weak beats. Palestrina published a collection of four-voice Magnificat settings in Venice in 1591. Another 20 settings on the same text ranging from four to eight voices remained unpublished, but were copied for the use of the Vatican choirs.

Giovanni Pierluigi da Palestrina: Magnificat
We know that Johann Sebastian Bach studied a number of Palestrina compositions in preparation for his Mass in B minor. Highly Italianate in character, Bach’s only Magnificat setting written for the Christmas celebrations 1723 is considered one of his finest choral works. The text divides into 11 parts, roughly corresponding to the ten verses of the canticle, with Bach adding the “Gloria Patri” in accordance with established liturgical conventions. The festive nature of the Bach’s setting is underscored by a work that makes use of the largest orchestra available to the composer; three trumpets with drums, two flutes, two oboes—doubling oboe d’amore in several numbers—strings and continuo. Bach also employs a five-part chorus, together with a solo quintet of the same distribution. The work’s splendor and jubilation derive from Bach’s remarkable ability to balance and exploit the spiritual and dramatic elements of each text. Lux luceat in tenebris!