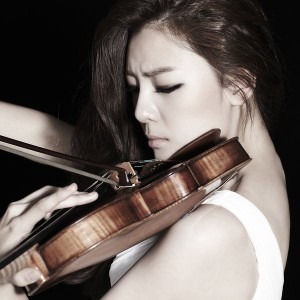 The Hong Kong International Chamber Music Festival has a reputation for attracting some of the best musical talent from around the globe, and this year is no exception. German-born Korean violinist Clara-Jumi Kang is appearing there this January, giving concerts alongside artists including Martin Beaver, DaXun Zhang, and Paul Neubauer.

Clara came from a very musical family – both her parents were opera singers – so it’s no surprise that her earliest musical memories are of the operas of Mozart, Verdi and Wagner.

When she was just four, she became the youngest ever student at the Mannheim music school, studying under Valery Gradov – and it didn’t stop there. The iconic Juilliard School of Music became Clara’s home at the age of seven, enrolled on a full scholarship to study with Dorothy DeLay and Hyo Kang.

‘It was a great experience and I truly learned so much. I was there for three years and although I don’t remember much of my daily life in New York, surprisingly I remember the lessons I had with both of them very well.’

DeLay has a somewhat legendary status because of her approach to teaching and the number of future superstars who passed through her lessons, Itzhak Perlman, Gil Shaham, Sarah Chang and Nigel Kennedy included. Clara often gives masterclasses at the festivals she visits, and it seems as though DeLay’s famously supportive and encouraging pedagogy is mirrored in Clara’s attitude towards teaching.

‘I enjoy giving masterclasses because I feel like help goes both ways. I help pupils find an answer and while doing that, I myself learn a lot too.’

After her spell at the Juilliard School, Clara travelled to Korea to study with Nam-Yun Kim at the Korean National University of Arts. By this point, she’d already performed with orchestras including Leipzig Gewandhaus, Atlanta Symphony, and Seoul Philharmonic, and by the time her studies have finished, Clara had scooped prizes at competitions in Sion, Indianapolis, Seoul, Sendai, and Hanover. 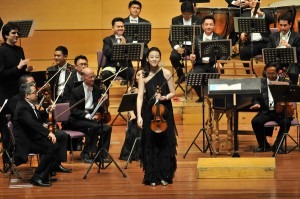 During the week of the Hong Kong Festival, Clara is playing in three of the Festival’s five concerts, including works by Mozart, Rossini, Bizet, Schubert, and Schumann. For Clara, as for many of the other performers, Hong Kong will be one of many destinations on her international touring circuit. How does she balance the travel and intense work within her life?

‘I honestly don’t try to balance it. I see work as a big part of my life and traveling comes naturally with it, so I don’t try to separate it too much.’

For many musicians, an antidote to a heavy day of work is to turn off the classical stuff, to listen to something totally different – or to nothing at all. Not for Clara; her iTunes playlist is saturated with Beethoven, Brahms, Mahler, Bruckner Symphonies, ‘and a lot of Piano works!’ she adds. She grabs relaxing moments when she can by ‘reading, watching documentaries and films, going for long walks, or having dinner with friends and drinking wine!’

The long walks may have to wait, though, as 2016 looks set to be a busy year: ‘Many exciting concerts are ahead! I’m also enormously looking forward to recording the three complete Schumann Sonatas in March with pianist Yeol Eum Son.’