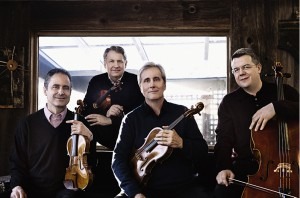 The Emerson String Quartet travels to Hong Kong this month to perform at the annual Chamber Music Festival. Paul Watkins, the Quartet’s cellist, balances a busy solo career against the work of the Quartet, much like the other members of the group (violinists Eugene Drucker and Philip Setzer, and violist Lawrence Dutton), and this month alone sees them whizzing between the USA, China, Hong Kong, South Korea and Canada, in addition to their solo work.

Paul succeeded David Finckel in 2013 to become the newest member of the Emerson Quartet. He’d heard and seen a lot about the Quartet ever since his teens, and was curious to experience first-hand one of the Emerson’s traditions: the switching of the first and second violin players.

‘The idea was between Gene and Phil right from the moment they decided to form the Quartet,’ Paul explains. ‘The thing people often ask about is their specific roles for specific pieces.’

Paul goes on to describe how once they’ve decided who’s playing which part of which piece, it never changes. For example, when the Quartet plays Schubert’s ‘Rosamunde’ Quartet in A minor in Hong Kong in a few weeks, Philip will always play first, and Eugene will always play second. For a new piece in the Quartet’s repertoire, they decide from the outset who’s doing what.

‘In a regular quartet, there’s often an enormous amount of pressure on the first violin,’ he adds. ‘They’ve divided up the repertoire as equally as possible, and musically that means that the second violin is never dissatisfied with what he’s doing. It keeps it fresher.’

I ask Paul about the Emerson’s other tradition: standing while playing. The Quartet has been standing in their performances for about 20 years, with their cellist on a riser. He cites a project the Quartet did with British director Simon McBurney, a dramatisation of Shostakovich’s String Quartet no.15.

‘It was an hour long theatre piece which culminated with the Quartet playing the whole piece from memory, moving round the stage, being shadowed by 4 actors.

‘Even the cellist was walking around in the less demanding bits. They experimented and felt comfortable doing it. They definitely felt freer.’ 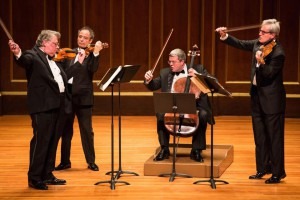 Collaborations often lead to exciting discoveries, and the Emersons regularly collaborate with many artists including Barbara Hannigan, Roberto Diaz, and the Calidore Quartet. Their most recent CD featured works by Berg and Wellesz with world-renowned soprano Renée Fleming, and Hong Kong is no exception to the spirit of collaboration that runs deep in the Quartet’s veins.

Their upcoming appearance at the Hong Kong Chamber Music Festival includes a performance of Mendelssohn’s String Quintet no.2 with Toby Hoffman, and while playing with Toby is a first for Paul, he’s confident about the approaching collaboration, as performing together is as much a blending of personalities as musical instruments. This also goes for the four members of the Quartet: when travelling frequently, and with the same people, it can be hard to balance one’s personal, private, and professional lives, but Paul states ‘it’s surprisingly sane from that point of view.’

‘We’re busy as an ensemble. With about 85 concerts a year, it’ a fair old workload. We don’t always travel together, especially when we’re coming from different parts of the USA to a concert somewhere. But we respect each others’ privacy. That’s why the Quartet has lasted so long.’

All the individual members of the Emerson Quartet have busy lives outside the group, but there is a common shared belief that the Quartet comes first. Does it ever get difficult planning diaries?

‘It’s just a question of forward planning. The Quartet operates what I think is a sensible policy in that it doesn’t vote on things, but if someone really doesn’t want to do something, they have their power of veto. It can definitely operate with mutual trust and respect.

‘You hear of quartets who operate much stricter guidelines. But that’s not in the personality of my colleagues, and I think that’s what attracted me to the group in the first place. We’re not very dogmatic!’