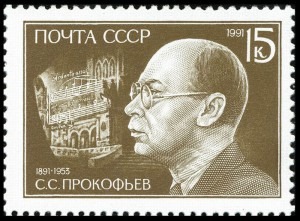 It is somewhat surprising that Prokofiev’s earliest effort in the symphonic genre also became one of his most popular and most frequently programmed works. Composed in 1916/17, Prokofiev subtitled his Symphony No. 1 “Classical.” That nickname was apparently chosen to describe the work’s character, which contains a number of features borrowed from Viennese Classicism. The work unfolds in a predictable four-movement form with two faster outer movements bracketing a lyrical slow movement and a stylized dance. Although sharply dissonant at times, its lighthearted and humorous character owes much to the spirit of Joseph Haydn. Prokofiev’s attitude towards the work remained ambiguous, however, and it has been suggested that the subtitle was directed at his critics. In Prokofiev’s own words, “it was meant to tease the geese.”

Sergei Prokofiev: Symphony No. 1, Op. 25 “Classical”
During his last visit to the United States in 1938, Prokofiev visited the Hollywood film studios and familiarized himself with the latest cinematographic techniques. Back in the Soviet Union, he immediately put his experiences to good use when the famed film director Sergei Eisenstein invited him to collaborate on Alexander Nevsky. This dramatization of a thirteenth-century conflict between the Russian people and Teutonic invaders took on added significance as an invasion by Nazi Germany seemed inevitable. The film became an internationally recognized masterpiece, and was soon included in the world’s 100 best motion pictures. Prokofiev in turn composed some of his most dramatic and brilliant music, and conductor Valery Gergiev suggests that Prokofiev’s music for this film is “the best ever composed for the cinema.” Prokofiev re-arranged the score as a cantata for concert performance in 1939.

Sergei Prokofiev: Alexander Nevsky, Cantata Op. 78
Prokofiev’s 2nd Violin Concerto reflected, according to the composer, “my nomadic concertizing existence. The Concerto was written in the most diverse countries; the main subject of the first movement was written in Paris, the first theme of the second movement in Voronezh, the instrumentation was completed in Baku, and the premiere took place in December of 1935 in Madrid.” This work, more so than any other in his compositional oeuvre, reflects the multicolored strands of personal and creative influences that informed the uniqueness of his musical style. Transparent, emotional and lyrical throughout, references to traditional Russian folk music give way to hauntingly beautiful and drawn-out melodies luxuriously bathed in traditional harmonies. The concluding “Allegro” meanwhile employs castanets, triangle, bass and snare drum to create an atmospheric rondo deeply steeped in a Spanish musical tradition.

Sergei Prokofiev: Violin Concerto No. 2, Op. 63
Prokofiev’s most popular composition is his ballet adaptation of the Shakespearean drama Romeo and Juliet, dating from 1935/36. In all, Prokofiev produced not only the ballet score but also extracted three orchestral suites and a set of ten piano transcriptions. Specifically the piano transcriptions, with its immediate appeal to a large number of amateur pianists and professional performers, were thought to become the salvation of modern music. Of all the modern composers, a contemporary Chicago critic wrote, “this tall and boyish Russian has the most definite gift of melody, the most authentic contrapuntal technique, and he displays the subtlest and most imaginative use of dissonance.” It is powerful and virtuosic music expertly drawn from the original ballet score. With impressive economy of means and without ever resorting to inflated emotionalism, Prokofiev’s musical pictorialism “ is endlessly intriguing and his musical footprints clearly recognizable.”