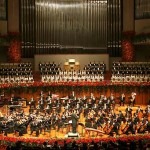 For the first time an orchestra in mainland China is taking on a foreign music director: the French conductor Michel Plasson is becoming music director of the China National Symphony Orchestra.

I was intrigued to read on MusicalAmerica.com yesterday (sorry, you need a subscription for the link to work) that for the first time an orchestra in mainland China is taking on a foreign music director: the French conductor Michel Plasson is becoming music director of the China National Symphony Orchestra. Certainly, many Western conductors have worked in China: Maurice Peress, for one, has appeared frequently with Chinese orchestras including the CNSO. There are two sticking points to an actual music directorship: dealing with the Chinese bureaucracy as a foreigner without skills in the language, and salary. In Plasson’s case the later, at least, has been taken care of, according to Musical America, by a private sponsor.

The former, the bureaucracy, may or may not be more difficult. The CNSO has actually been without a music director since Muhai Tang left in 2001 (Tang, who went on to the Finnish National Opera, is now the chief conductor of the Zurich Chamber Orchestra), in a departure that was described to me when I was in China this summer as a “coup d’etat.” The CNSO, of course, is funded by the Chinese government and its leadership issues are therefore on some level always political (the same is true in most European countries where government subsidy is the norm). Plasson, however, will probably be in some sense an illustrious figurehead: his contract only runs for a year, which is not really a music directorship in the sense most American orchestras are used to the term. Still, he will conduct ten concerts, which should be enough for a considerable relationship to develop.

It remains an interesting step, though Western audiences may not get to hear the result unless the orchestra decides to tour at short notice. It’s China’s oldest orchestra, the Shanghai Symphony, that’s coming to Carnegie Hall under Long Yu, the most important conductor in China, as part of Carnegie Hall’s “Ancient Paths, Modern Voices” festival focusing on China later this month.

Another Chinese orchestra currently touring in the U.S., it was brought to my attention today, is the Xiamen Philharmonic, which made its North American debut in Richmond last Sunday and continues on to California, where it will play at Scripps College later this week. This orchestra was founded 11 years ago by Xiaoying Zheng, now in her 80s, China’s first female conductor with conservatory training and an erstwhile leader of the Beijing National Opera and another orchestra she founded, the Female Philharmonic Orchestra (or so the translation has it). I know nothing of her work or, even by reputation, that of the composer Liu Yuan, who wrote the piece she is touring, “The Echoes of Hakka Earth Buildings.” But she sounds like quite a character.