Blog
I Have a Little List: Was Don Giovanni the Great Lover?
by Maureen Buja December 8th, 2015 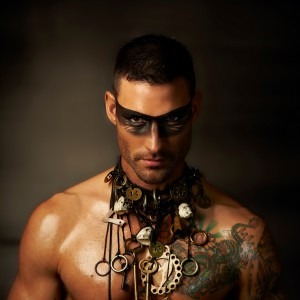 In the opera Don Giovanni, there’s a particularly cruel scene where the Donna Elvira, meeting Don Giovanni’s servant Leporello, has to hear how she is just one of a large number of women that the Don has seduced. In the famous catalogue aria, ‘Madamina, il catalogo è questo…,” Leporello tells her, by country, the number of women in his life.

Mozart: Don Giovanni: Act I Scene 5: Aria: ‘Madamina, il catalogo é questo’ (Leporello) José van Dam – Leporello; Paris National Opera Orchestra; Lorin Maazel, cond.)
Leporello keeps a catalogue in a “little book” of the names of each of Don Giovanni’s “sweethearts.” Lepoorello, has not only taken down each name, but has also cross-catalogued them by town and district. 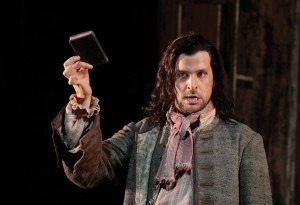 Luca Pisaroni as Leporello in Don Giovanni at the Met, 2011.
© Beatriz Schiller 2015

The list is impressive: his lovers have included “peasant girls, maidservants, city girls, countesses, baronesses, marchionesses, princess,” or, in other words, women of every rank of society. He has seasonal preferences: fat women in winter, thin women in summer. Don Giovanni praises their attributes based on their hair colour: blondes are valued for their kindness and sweetness whereas brunettes are praised for their faithfulness. 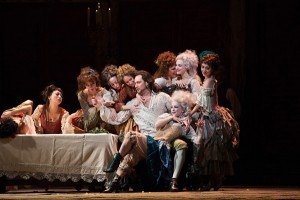 The numbers are fantastic – or perhaps fantastical, because as far as we see in the opera, it’s not about the successes of Don Giovanni, but rather his failures. The opera opens with Don Giovanni stealing into the house of Donna Anna, but she and her father, the Commendatore, chase him out, ending, unfortunately, in the death of the Commendatore.

Later, he attempts the seduction of Zerlina, a peasant girl newly engaged to Masetto, but Donna Elvira thwarts his plans.

At the end of the opera, Don Giovanni holds a grand dinner, Donna Elvira appears, but seeing something at the door, flees screaming. It’s the statue of the Commendatore, which Don Giovanni, while hiding out in the cemetery, has invited to dinner. The Commedatore tells Don Giovanni to mend his ways or death awaits and Don Giovanni chooses death and is dragged down to hell.

In the end, the number to be added to Leporello’s catalogue for the opera is a grand Zero. In the 1979 movie, Don Giovanni, directed by Joseph Losey, a gratuitous seduction scene was added that did much for Don Giovanni’s reputation, but was not part of the opera’s original story.

So here’s the final problem: do we believe Leporello’s little book and those suspiciously large numbers for Don Giovanni’s conquests? Does 2,065 women in his life sound possible? I leave it in the realm of stories told by friends, who can only guess at what you’ve been up to!