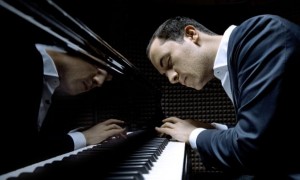 Igor Levit the fascinating German-Russian pianist was featured on the Schubert Club’s International Artists Series here in Saint Paul, Minnesota recently. The highly anticipated program had us on tenterhooks as the lone piano stood on the empty stage. Then out he walked in a long, flowing, white shirt, one arm leading his lanky body, and with barely a bow he sat at the instrument and began. He immediately set a tone of introspection— a serious, studied, and probing approach, as if suspended in another dimension.

Before recorded music, composers often arranged, transcribed, and borrowed themes from one another to pay homage to previous masters. The program, carefully structured to investigate great original works, not necessarily originally for piano, were presented as transcribed by master composers for the piano. Both Franz Liszt and Ferruccio Busoni’s arrangements were featured. On paper, it did look a little confusing—Bach arranged by Brahms, Busoni based on Bach, Schumann inspired by Schubert, Wagner arranged by Liszt, and Liszt arranged by Busoni—but each work melded seamlessly into the other, and Levit did not pause or leave the stage between the pieces.

Perhaps one of the most revered works of J.S. Bach opened the program, the Chaconne in D minor, from the Violin Partita BWV 1004. Arranged by Brahms for left hand alone, and sent to Clara Schumann when she had injured her right hand, this work is one of only a handful Brahms based on music of other composers. Levit transported the audience with his singular, flawless technique, each chord perfectly balanced. The audience was rapt as Levit immersed himself in the music oftentimes ‘conducting’ with his right hand, his figure bent over the piano, in private rapture.

Bach: Chaconne from the BBC

Busoni’s talent was recognized at a very early age and he became a leading piano virtuoso in the early 1900s, often performing recitals, which included his many transcriptions of the music of Bach. Primarily known for these arrangements, it was a rare opportunity to hear one of Busoni’s original compositions, Fantasia after J.S. Bach BV 253. Levit produced an exquisite tone, bringing out the lines of the fugue with great control of the dynamics, especially the hushed and barely audible pianissimos. Written a few days after the loss of the composer’s father, one sensed a great affinity with the composer’s anguish. And indeed, Levit recently experienced a tragic loss, which has resulted in this program and his contemplative, reflective music-making.

Busoni: Fantasia nach J.S. Bach
Levit segued into the Theme with Variations in E-flat WoO 24, Ghost Variations by Robert Schumann, composed just weeks before he attempted suicide, his finale work. Schumann is said to have had hallucinations when he heard a melody by Schubert upon which this set of five variations is based. It is dedicated to Clara Schumann, another connection to the first work on the program. The markings in the music indicate that it should be played introspectively. Levit played with a similar muted dynamic—gentle, pensive, meditative.

The second half included the Solemn March to the Holy Grail, from Richard Wagner’s opera Parsifal arranged by Liszt, followed by the Fantasy and Fugue on the Choral Ad nos, ad salutarem undam by Franz Liszt arranged by Busoni. One piece melded into the other without pause. The final work seemed to me to bring the program full circle connecting to the opening chaconne. Playing with incredible softness, extremely long pauses, and with a suspended sense of time takes immense control. Those who sat close to the stage were mesmerized; those who sat further back in the large hall, were anesthetized. I think savoring each work on its own, especially on first listening, would have been preferable.

Liszt: Fantasy and Fugue on the Chorale Ad nos, ad salutarem undam by G. Meyerbeer, S259/R380
Levit’s approach is unique. I am reminded of the genius of Glenn Gould, who was fiercely independent and resistant to the live concert experience. Levit, like Gould, seemed to be immersed in his deepest, innermost sanctum. One can imagine him alone with the piano playing at a remote shrine and we in the audience, the privileged few, there to overhear his mystic communion with music.

Recently, Igor Levit has recorded these works in an album entitled Life and he will be performing this program until the end of the year.

A musician who is destined to break the molds and create a new universe for music-making—one that is limitless, transcendental, unlike any we have heard before—Levit creates poetic moments, without pretensions, using silence as a means to wordlessly guide audiences to inner realms.