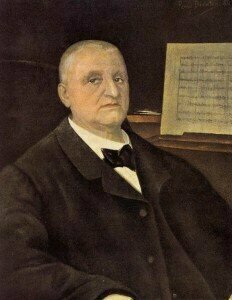 Nothing came easy for Anton Bruckner, and habitually plagued by debilitating periods of low self-esteem, he was an easy target for music critics, journalists and composers alike. A particularly vicious critic accused him of “composing like a drunkard.” Given such harsh professional assessments, it is not surprising that Bruckner was prone to suffer from devastating insecurities that made him endlessly revise and correct his compositions. By the age of 43 he had plunged into a state of deep depression and seriously entertained thoughts of suicide. Just in time he was admitted to a sanatorium at Bad Kreuzen and underwent a period of treatment that lasted several months. And giving thanks to the restoration of his mental facilities he set to work on his Mass Nr. 3. It took Bruckner an entire year to finish the first version of his longest and greatest Mass, a work injected with a newly found vitality and profound religious mysticism.

John Herbeck conducted the first rehearsals and found it “too long and basically impossible to sing.” After a number of substantial delays, the mass finally premiered on 16 June 1872 at the Augustinerkirche with Bruckner conducting. Herbeck eventually changed his mind and claimed that it “stood alongside Beethoven’s Missa Solemnis.” Following a second and third performance in 1876, Bruckner made revisions on the Kyrie and the Gloria, and in 1877 on the Credo. Another revision followed in 1881, and still not satisfied, Bruckner revised it further between 1890 and 1893. At a November 1893 performance, Johannes Brahms apparently “applauded so enthusiastically that Bruckner personally thanked him.” And in a letter to Siegfried Ochs, director of the Berlin Philharmonic Choir, on 14 April 1895, the composer wrote, “I am getting old and would very much like to live to hear the F Minor Mass. That would be the climax of my life.”