In 1742, Bach, late in his career, took a long look back at the music of his day and made such a thorough-going parody of it that we’re still not sure if he was making a social commentary or a musical joke. The Peasant Cantata, BWV 212, also has the title of Mer Hahn en neue Oberkeet, which in local Saxon, for We have a new Governor.

We can tell from the opening Sinfonia that we’re in a simple rustic musical land. As you listen to this unusual opening instrumental section, written for a simple ensemble of violin, viola, and cello (no keyboard needed, although most performances include one), you find it’s an assembly of short dance melodies. The key jumps all over the place, the tempo and time signatures change everywhere, and, as one writer has said, ‘Bach is offering a demonstration of how not to write music or, at least, how he does not usually do it.’

Carrying the dance idea from the overture forward, the first duet is a bourrée. The origin of a bourée was a French clog dance and that same thumping rhythm comes here. The two characters of the cantata, an unnamed farmer and his wife Mieke, exchange jokes and celebrate the fact that the new Lord of the Manor has supplied beer. The farmer complains about the tax collector, who is ready to slap a new tax on just as the farmer gets clear of his debts. This is Bach at his best – listen in particular to the imitations that get thrown between the bass and the strings. 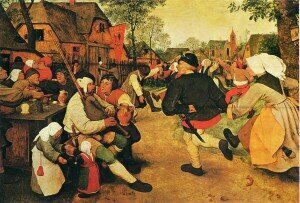 Aria: Ach, Herr Schosser, geht nicht gar zu schlimm (David Thomas, farmer; Academy of Ancient Music; Christpher Hogwood, cond.)
Mieke counters this with an aria on how pleasant the new Lord is, in whom no one can find fault.

Aria: Unser trefflicher lieber Kammerherr (Emma Kirkby, Mieke; Academy of Ancient Music; Christpher Hogwood, cond.)
The farmer goes on to praise the lady of the mansion, who is “just like us” (at 01:15) and her frugality can turn pennies into taller.

One aria is set as a minuet with long ritornello sections that are ornamented by the flute (or recorder). The text celebrates that the day should be “nothing but an abundance of blessings.” A piece more clearly made for dancing cannot be imagined.

Bach calls attention in one recitative that the next song will be an old tune, and it is, indeed, styled on a peasant attitude that one should have many sons.

Aria: Gib, Schöne, viel Sohne (Emma Kirkby, Mieke; Academy of Ancient Music; Christpher Hogwood, cond.)
The farmer confesses that his song was too rustic so his next song is modelled on ‘something like they do in town,’ and here we see Bach’s humour emerge. The original setting of the melody is from Bach’s cantata Phoebus and Pan, which may have been performed over a decade earlier. In Phoebus and Pan, the music was used to show music that was not very refined. Here, the farmer takes it as his example of music of the highest art. Is Bach laughing at his audience or himself?

Aria: Dein Wachstum sei fest und lache vor Lust (David Thomas, farmer; Academy of Ancient Music; Christpher Hogwood, cond.)
The cantata closes with a final duet where the farmer and Mieke decide to go off to their tavern where the bagpipes play. It is here that we get the name of the new Lord, Dieskau, as our couple go off for yet more beer and festivities.

Chorus: Wir gehn nun, wo der Tudelsack (Emma Kirkby, Mieke; David Thomas, farmer; Academy of Ancient Music; Christpher Hogwood, cond.)
The work was written for Carl Heinrich von Dieskau, a tax superintendent who had inherited a number of properties, hence all the jokes about taxes and the fact that the two characters are the peasants that Dieskau will be having the most effect on. Bach called the piece a “Cantate burlesque” (Burlesque Cantata) and it was presented to Dieskau on his 36th birthday. It’s a fun little piece and shows Bach as a composer who can tell a joke as well as anyone.