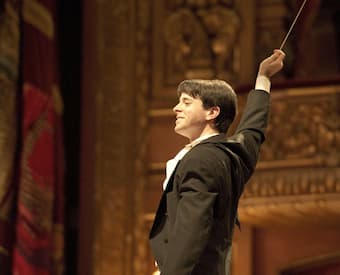 In these times of restricted travel and stringent quarantine, it’s wonderful to have a visiting conductor who’s willing to do a 3-week quarantine as the first step to conducting your local orchestra. Argentinian conductor Mariano Chiacchiarini put himself through quarantine to bring to Hong Kong a treble treat: an evening of Brahms, an afternoon of Saint-Saëns, and a double evening of Piazzolla and other Argentinian composers.

Each element allows us to discover the dimensions of this young upcoming conductor. Resident in Germany, he regards Brahms as one of the composers closest to his heart. His opening evening with the Hong Kong Philharmonic brought not only the lively Hungarian Dance No. 1 but also the greatness of the Symphony No. 4. He said that when the Philharmonic started in on the second movement of the symphony in rehearsal, it brought tears to his eyes to be once again hearing the music he loved.

The concerto part of the concert was taken up with the Weber Bassoon Concerto, with HKPO Principal Bassoonist Benjamin Moermond as soloist. With an orchestra that had been socially distanced, with face masks on the string players and percussionists, and boxes around the wind instruments, the soloist also had to stand in a three-sided plexiglass box. Now Maestro Chiacchiarini had to help the string players hear the boxed soloist, since his sound was now blocked from them. 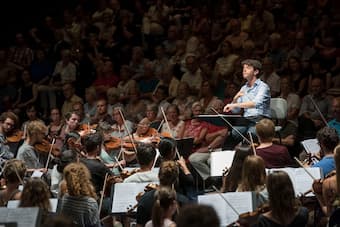 We spoke about conducting the socially distanced orchestra and what it meant for him as a conductor. With the winds separated from each other not only by distance but also with walls, it was difficult for them to hear each other. As a conductor, he had to do more work – give more upbeats, give more guidance – to help the ensemble stay together when their usual audio guideposts were missing.

He fell in love with music as a child and progressed through piano, guitar, viola and singing in turn. When he was 15, he asked the question that would lead him to his career: “what is conducting?” The conductor needed to start with knowing the instruments, needed to know the languages, needed to know the repertoire, and needed to know the psychology of leadership. Often it wasn’t what was said but how it was said that led to the most effective outcomes. He finds the theatre of an orchestra performance something fascinating. In his own ensembles, he’s been known to move the first chair players to the back of a section so that the players in the back have to come forward, and can benefit by being pushed by the players behind them. It makes the usual the unusual.

The afternoon concert of Saint-Saëns’ The Carnival of the Animals enabled him to appeal to the audience and players of the future. He wants children to see instruments in action and hear their individualities and fall in love with the bassoon or the violin through a concert. That’s the only way that we will continue to have music.

His double concert of Piazzolla, celebrating Piazzolla’s centenary, brings to the stage the symphonic tango of Four Seasons of Buenos Aires with Ginastera’s Estancia.

Astor Piazzolla took the tango of Buenos Aires and made it international. Reviled for his changes in his native Argentina (he told of taxi drivers refusing to pick him up), he went abroad and developed his unique style. He changed the tango rhythm from its strict 4, with the emphasis on 1 and 3, to a very complex 3+3+2 rhythm. It’s no longer danceable but has taken us to a greater and deeper understanding of the tango as a genre. A key element in Piazzolla’s music is the transitions between sections. While maintaining an alternation of Fast-Slow-Fast movements, the performer must also consider how to move in and out of these changes. 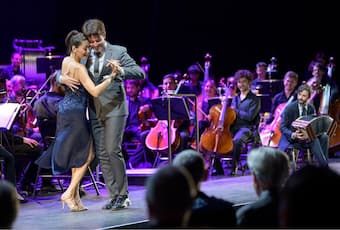 Maestro Chiacchiarini has his own interest in tango, for as an Argentine, he learned the music and the dance. For his Hong Kong concerts, he is involving the local tango community for an evening of the music, the dance, and the poetry of the tango. Tangos by Rodríguez and Plaza will give us a taste of the classic Argentinian tango.

The concert opens with Piazzolla’s Tangazo (Grand Tango), one of his symphonic tangos.

The concert will close with Piazzolla’s famous Libertango.

We talked about music in the time of COVID-19 and about his disappointment that the concert halls in Germany had been forced to close. He fears that people will lose their appreciation for the varieties of music, confined as most of them have been to single performances. He likes the new format of 70-minute concerts without intermissions as it makes it easier for the conductor to create an intense, focused evening and, at the same time, permits the audience to listen without committing them to hours at a concert hall. The limited time means an examination of the traditional orchestral evening and allows the inclusion of works that might have been marginalized before by their brevity.

His avocation of Piazzolla’s music as serious symphonic fare leads him to make an analogy between Mozart’s music and that of Piazzolla: Mozart’s music is easy on the page but difficult to play as an art. He finds the same with Piazzolla: the music follows a long-established Argentinian style but that doesn’t make it simply music for entertainment. This is music that is equally difficult to play as Mozart’s.

We asked what he did in his time off and number one on his list was dancing tango. He reads a lot and does sport. To improve his German when he moved to Germany, he joined a level-three soccer team. He used to do martial arts until he had to save his hands for conducting, but in its places, especially for his time in quarantine, does yoga. One of his most favorite pastimes, however, is going to concerts: opera, ballet, symphonies. While in Hong Kong conducting the HK Phil, he also caught a concert of the Hong Kong Sinfonietta and spoke in admiration of what they’d done with Peter and the Wolf and the use of animation.

We look forward to his Piazzolla concert this week and all his future projects!