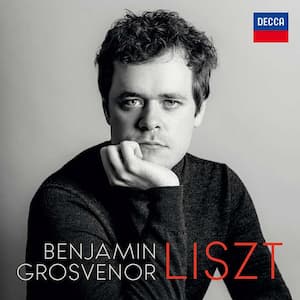 Known for his technical mastery and musicality, British pianist Benjamin Grosvenor achieved worldwide acclaim after winning in the keyboard section of BBC Young Musician of the Year 2004 at the age of 11. Recorded in London in October 2020, this album presents a compelling all-Liszt programme, which consists of Liszt’s monumental Piano Sonata in B minor and a compilation of both lesser-known and more recognised pieces, showcasing different facets of the great composer.

The album starts with Liszt’s Piano Sonata in B minor, which is notoriously known for its technical demand and interpretive difficulty, asking for real understanding of its formal complexity. Dedicated to Robert Schumann in return for his Fantasie in C major, Liszt fused traditional sonata form and four-movement structure in this one-movement work, while musical ideas undergo continuous metamorphosis, ranging from a diabolical fugato to a glorious declamation. With his imaginative playing, Grosvenor invites the listeners to a journey going back and forth between heaven and hell, conveying a diverse spectrum of moods – suspension, tumult, tenderness, triumph and so much more.

His playing has a sense of architecture with structural integrity, without compromising the fantasy-like quality of this masterpiece. Grosvenor’s approach is slightly cautious in the beginning, but his playing as a whole has spontaneity and melodrama, revealing seldom-heard subtleties of the music. The technical challenges are often well-negotiated with razor-sharp precision and bravura, while the more introspective moments have an enticingly narrative style, benefitted by some delicate voicing.


It is followed by Liszt’s little-known Berceuse in D-flat major, S.174ii. Two versions of Berceuse exist, and this second version, written in 1863, has more elaborate decorations than the first one and contains a kind of fragile beauty reminiscent of Chopin’s Berceuse. Grosvenor creates an airy atmosphere with a refined tone and filigree in this charming, meticulously ornamented gem, bringing the piece to an ethereal conclusion. 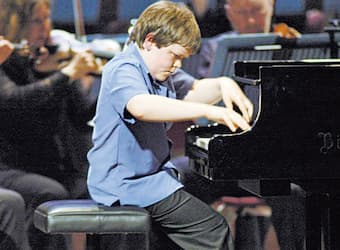 These three pieces from the second volume of Années de pèlerinage (Years of Pilgrimage) were inspired by the sonnets of Italian Renaissance poet Francesco Petrarca, through which he expressed his unrequited love for Laura de Noves. Grosvenor delivers a musically outstanding performance of these three sublime sonnets, in particular Sonnets 104 and 123. Here, he is more generous with his use of rubato and maintains a bel canto singing style throughout. The sonnets are played in a colouristic, highly nuanced and intensely expressive yet controlled manner – with phrases carefully crafted in Sonnet 47, a dramatic outburst of passion in Sonnet 104 and transcendental beauty in Sonnet 123. Passionate but never forced, emotional but never over-sentimental – Grosvenor explores the alluring harmonies and sonorities with the literal inspirations eloquently portrayed.


Then, the album presents a technically assured rendition of Réminiscences de Norma. As the name of the piece suggests, Liszt employed thematic materials from Bellini’s opera Norma and distilled this tragic opera into a 16-minute-long masterpiece. Pyrotechnics, such as rapid octaves and hand-crossing, were used not only for the sake of virtuosity, but also for creating dramatic effects. Apart from the superficial technical brilliance, Grosvenor’s playing has passion and refinement in its execution, and the thematic materials are always prominent even in the midst of the most difficult passages. Consistent with the sonnets, the melody is lyrically characterised while conjuring up orchestral colours from the piano, which eventually leads up to a resplendent climax.


Grosvenor ends the album with Liszt’s transcription of Schubert’s Ave Maria. On a purely technical standpoint, there is a clear delineation of voices with a fine balance between the melody and accompaniment. However, Grosvenor seems to be preoccupied with emphasising the main melody and tackling the passagework, whilst the emotional aspect of the music is somewhat lacking.


That being said, this disc is exceptional in its entirety, with Liszt Piano Sonata and the three Petrarch sonnets as the highlights. Displaying a fine combination of musicianship, finesse and command of the keyboard, Grosvenor utilises his dexterity in the service of music instead of merely showing off. With his instinctive understanding of the music and impressive pianistic capabilities, Grosvenor is bound to become one of the most celebrated artists of his generation.

His new Liszt album is released by Decca Classics on 19 February.