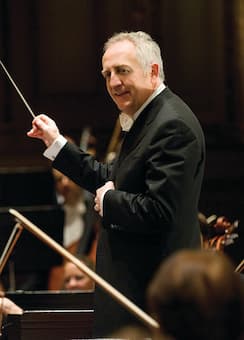 Beloved Maestro—seems like a non-sequitur. But the recent passing on July 12 of Bramwell Tovey has inspired these honorariums. So many colleagues have indicated how devastating it is to have lost Bramwell Tovey, cited not only for his tremendous contribution to music but also for his humor, wit, charm, and as an ambassador for music. Perhaps you haven’t heard of his distinguished accomplishments? That may be due to a trait not always associated with conductors: modesty.

Tovey served as music director of The Vancouver Symphony from 2000-2018. Upon the sad news, The VSO immediately established The Branwell Tovey Memorial Fund to continue Tovey’s important work with young people. “His commitment to music education led to the establishment of the VSO School of Music, now in its 12th year, and The Tovey Centre for Music that impacts thousands of students every year, nurturing musical appreciation and generations of emerging artists.” 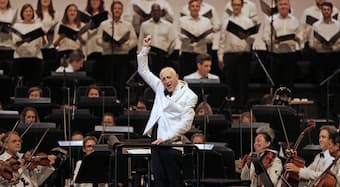 During an interview a few years ago with Westender Magazine in Vancouver, the writer tells the following anecdote: “When we sat down to start the interview, I brought up our first encounter, which went something along these lines: I saw Bramwell and his wife enjoying the day when I politely stopped him and said, “Excuse me, I hate to interrupt, but I must tell you, I think you’re a genius!”

He responded by saying, “Young man, you never have to apologize for calling me a genius.”

London-born Tovey had currently held the positions of Director of BBC Concert Orchestra, Music Director of Sarasota Orchestra, Artistic Director of the Rhode Island Philharmonic and Principal Guest Conductor with the Orchestre Symphonique de Québec where he charmed audiences and musicians alike. Tovey also was a popular guest conductor and his appearances with the Boston Symphony at Tanglewood, Chicago Symphony, Philadelphia Orchestra, and with the Los Angeles Symphony were consistently praised. In fact, in 2012 Musical America called him “one of the most versatile and charismatic musicians in the world.” His performances with the Boston Symphony of Johannes Brahms’ Ein Deutsches Requiem, said to be resplendent, was named one of the top ten classical performances of 2014.

Tovey played the tuba and the piano (both classical and jazz) an unlikely combination of instruments, but I believe due to this background he had an uncanny sense of how to work with an orchestra. Beginning his career humbly, he learned the ropes by playing in Salvation Army Bands and later as an opera rehearsal pianist.

In 1986 an extraordinary bit of serendipity ensued. Tovey was asked to conduct as a last-minute substitute for the opening night of the London Symphony Orchestra’s Leonard Bernstein Festival at the Barbican Center. As it happened the legendary maestro himself was in the audience. Bernstein invited Bramwell to attend his classes and rehearsals with the Boston Symphony Orchestra at the Tanglewood Music Center that summer. Hear Tovey tell the story!

Bramwell’s international career was launched. He conducted every prestigious orchestra in the UK; from 1984 to 1988 he was Principal Conductor of the Sadler’s Wells Royal Ballet, then part of the Royal Opera House; and from 2001 to 2006 Bramwell was music director of Orchestre Philharmonique du Luxembourg.

Tovey continually touched audiences with his performances and his own compositions. His Songs of the Paradise Saloon, composed for the Toronto Symphony Orchestra and trumpet soloist Andrew McCandless in 2009 is a piece that incorporates Tovey’s great wit. It playfully illustrates conversations one might have during an evening at a pub. The piece calls for McCandless to play six trumpets (not all at once), “It’s probably not going to make you think of spring and flowers,” says McCandless.

Tovey’s recordings with the VSO and for the CBC are highly regarded. In fact, in 2008 Tovey won the Grammy for Best Instrumental Soloist Performance for the recording with violinist James Ehnes of the violin concertos by Samuel Barber, Erich Wolfgang Korngold, and William Walton. Since 2000 he appeared approximately 150 times with the New York Philharmonic. Tovey’s own unique version of Last Night of the Proms was a highlight for many musicians. 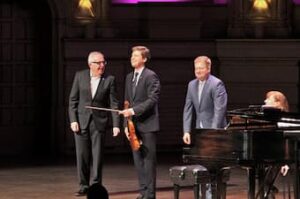 A successful composer, Tovey’s Requiem for a Charred Skull won a Juno Award in 2003 for best classical composition. He collaborated with award-winning playwright John Murrell to write The Inventor, his first opera, commissioned by the Calgary Opera and premiered in January 2011. It’s based on the true and modern story of Sandy Keith who’d attempted to plant a bomb on a transatlantic steamship. Its crude clock mechanism misfired and exploded while it was being loaded at the port of Bremerhaven in Germany resulting in numerous casualties. In June 2012, Tovey conducted the UBC Opera and the Vancouver Symphony Orchestra in a live recording of the work. Other compositions include among others a mesmerizing piece entitled Stream of Limelight written for Ehnes’ 40th birthday for violin and piano, a cello concerto, a brass quintet, Ancestral Voices, and a lovely Christmas Carol Not Very Long Ago commissioned by Christ Church Cathedral in Victoria, BC, Canada. Apparently, he wrote the piece on a flight from Boston to Toronto in under two hours! 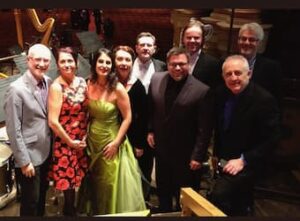 After concert photo of the 2017 performance of
Afghanistan: Requiem for a Generation by Jeffrey Ryan

Tovey was extremely generous with other living composers. In 2017 The Vancouver Symphony, (and later the Toronto Symphony) performed Afghanistan: Requiem for a Generation by Jeffrey Ryan, considered one of Canada’s most outstanding composers, “It was a gift and an honour to be his Composer-in-Residence. Here is a photo after he led the VSO’s stunning performance of my Afghanistan Requiem. Thinking of all those whose lives he touched.” 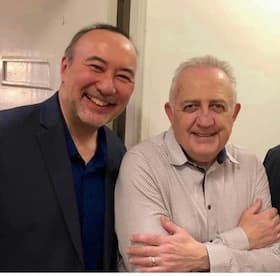 Colleagues cite Tovey’s outgoing and hilarious personality. The pianist Jon Kimura Parker tells this story: “Bram was the first conductor to invite me to perform with the New York Philharmonic. It was Rhapsody in Blue on a July 4th. Bram turned to the audience and said, ‘Congratulations on this special patriotic holiday and you really thought this through: you’re featuring a British conductor with a Canadian soloist!” Parker added, “I will miss him so much” When you hear Tovey introduce Tchaikovsky’s 1812 Overture you’ll understand why he was universally referred to as ‘beloved maestro.’