Artists Behind the scenes
Behind the Curtain
Big Luciano
by Georg Predota January 7th, 2017 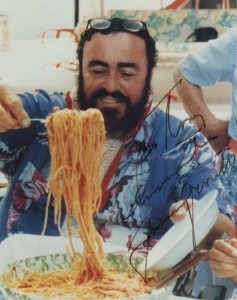 You only needed to take one good look at Big Luciano Pavarotti to know that he was a ferocious eater! At his most robust, his weight peaked at about 160kg. A couple of radical diets reduced his weight by roughly 30ks, but fueled by his voracious appetite and a severe dislike for any kind of physical exercise, he gained it all back in no time at all. A reporter once asked him if he engaged in regular exercise. “Absolutely,” replied Pavarotti, “I walk an hour or two every morning. And if you believe that, I’ll tell you another one.” Long-term singing engagements in foreign countries became existential food crisis, and Pavarotti would make sure that he had all eating contingencies covered before departing. In July 1986 Big Luciano was engaged for a month-long trip to China, and he arranged two chefs from the Zeffirino restaurant in Genoa to accompany him. “Pavarotti wouldn’t touch Chinese food, so he packed the plane with kilos and kilos of spaghetti, tomato sauce and olive oil and even brought whole wheels of Parmesan cheese with him.” Apparently, at the hotel in Beijing, two rooms were turned into his private kitchen. And he always had plenty of bottles of chilled Lambrusco handy to accompany his meals. Pavarotti famously said, “One of the very nicest things about life is the way we must regularly stop whatever it is we are doing and devote our attention to eating.” And Big Luciano did a lot of eating! After a performance in Bologna, a restaurant owner approached Pavarotti and told him, “Maestro, do you know that I make 53 different kinds of starters?” And Pavarotti replied, “And do you know that I am capable of eating them all?” By all accounts, that evening Big Luciano managed to eat 25 regularly sized portions! The only scale that Pavarotti struggled to conquer was the one in his bathroom!
Pavarotti’s all consuming passion for food was only matched by his ravenous appetite for women; I’ll tell you all about that in our next episode.