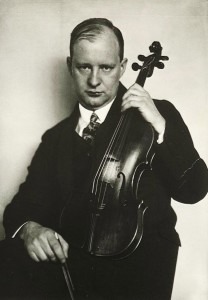 In my September Interlude article I focused on the close relationship between Bauhaus architecture, art and music. It is interesting to note, however, that the Bauhaus’ own teaching program consisted of studies in architecture, art and various crafts, whereas music composition, music theory, instrumental or vocal instruction were never taught at the school. But as I have written in last month’s article, the school’s theatre and art departments, under the direction of Oskar Schlemmer, pushed the boundaries between the different arts and brought contemporary dance and music into focus. Teachers and students, influenced by the many publications on these subjects, were committed to the various aspects of contemporary music. In 1923, they dedicated the Bauhaus-Week to the ‘Fest neuer Musik’/‘Celebration of New Music’. 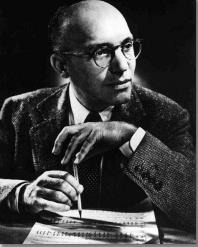 Many established musicians, generally classified as ‘neo-classicists’, participated. Igor Stravinsky arrived from Paris for the performance of his ‘A Soldier’s Tale’, which today would be called a ‘mixed media’ production, as that it uses speech, mime and dance, with the music changing from ragtime to tango to various other musical idioms. Paul Hindemith attended the premiere of his ‘Marienleben’/Life of the Virgin Mary’ – a composition for soprano and piano, which set 15 poems by Rainer Maria Rilke to music. Hindemith was already known to the Bauhaus milieu, as Schlemmer had asked him to write the music for ‘Hope, Murder of Women’ and ‘The Nusch-Nuschi’. Ferruccio Busoni, composer and professor of music, arrived from Berlin with his students, Kurt Weill and Stefan Wolpe. Did they only come to hear the performance of their works? Did they connect spiritually with Bauhaus’ artistic concepts? Did they personally feel connected to Bauhaus professors and students? I think that we can safely say that for all of them the Bauhaus was the place where modern art was not only taught by the greatest artists of their time — Gropius, Klee, Kandinsky, Itten and many others — but most of all, where modern art and the relationship between the various art forms was put to the test.

The Soldier’s Tale – Igor Stravinsky. Performed By The Constella Ballet And Orchestra 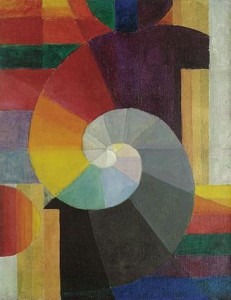 Wolpe, under Klee’s and Itten’s guidance, started studying art (although later he said “I am not a painter but a composer” – for which he became known), collecting objects from the street — cigarette butts, nails, dead birds, shredded paper, feathers, etc. and turning them into art works independent of their initial meaning. The Dadaists, like Kurt Schwitters, collagist and sound poet, with his Merz construction, would turn these ‘found objects’ into new works, playing with fragments of words and letters, leaving their interpretation open, and for the audience/observers to find their own meaning. For Schwitters, Merz meant to create connections, preferably between everything in the world. He wrote poems and musical works which played with letters and printed media. This approach can also be seen in the works of Eric Satie, who was well-known to all of the Bauhaus composers and artists. In ‘Parade’ Satie included found sounds from a typewriter, a fog horn and assorted milk bottles, setting its action in the circus and in the streets rather than the theatre, using ragtime and music hall tunes – to create a ‘musical collage’. 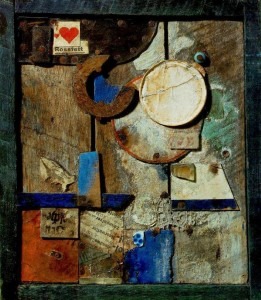 Wolpe was also influenced by Itten’s philosophical interest in Japanese art and Zoroastrian philosophy. Itten’s painting ‘The Encounter, 1916’ shows a rhythmic approach to movement in space, creating an animated space closely related to what would become ‘kinetism’ later in the century, color movement in space. Bauhaus architecture, such as the two examples here – the Bauhaus Archive in Berlin and the Bauhaus Museum in Tel Aviv also emphasize this movement in space with angles, repetitions and forms changing according to our perceptions and our movements within their particular space. 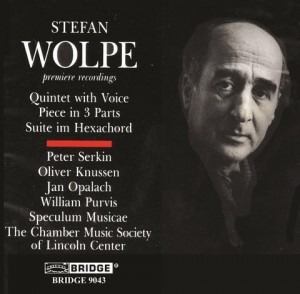 Through his teacher, Ferruccio Busoni, Wolpe’s early musical influence came from the neo-classicists, but he later became much more interested in Arnold Schönberg’s compositions and twelve-tone technique. Fleeing to Palestine in 1933, he became the leading disciple of the Second Viennese School (Schönberg, Berg and Webern), where he encouraged music amongst the settlers of the kibbutzim. He introduced them to music for the socialist struggle, which, like Kurt Weill, he had already espoused in Weimar Berlin as a member of the left-leaning ‘November Gruppe/November Group’. In his later works, after his move to the United States, Wolpe used what he called a mobile polyphony, with greater momentum of sound, creating multiple centers, multiple layers – still replicating the works of the Dadaists and Cubists, which he had so admired in his youth. 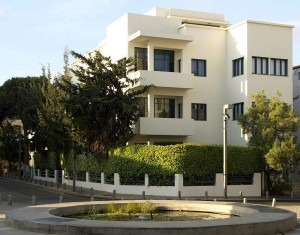 Kurt Weill, Wolpe’s contemporary and fellow student of Busoni, tended to move more towards vocal and musical theatre, such as in the Brecht/Weill collaboration of The Threepenny-Opera, 1928, using jazz and German music hall tunes. Like Wolpe, Weill was also invested in the socialist struggle in Weimar-era Berlin. He fled Nazi Germany in 1933, moving to the United States in 1935 and continued writing music intending to serve a socially useful purpose.

Die Dreigroschenoper (The Threepenny Opera) (excerpts)
The impact of the creative influences and the cross-connections between architects, visual artists and musicians during the Bauhaus years in Weimar, Dessau, Berlin, and later after the Bauhaus’ closing, with the exodus of many of its members to the United States, is very much felt to the present day.