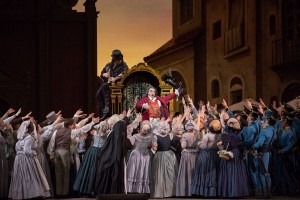 The Elixir of Love
Credit: http://img.theepochtimes.com/

In April 1818, the impresario of the Teatro San Luca in Venice accepted Enrico di Borgogna by the young and thoroughly ambitious Gaetano Donizetti. The opera met with little success, but it resulted in a further commission for Donizetti. Una follia was presented a month later, but failed to make an impact. In order to gather his thoughts and find a way to move his career along, Donizetto retreated to his hometown of Bergamo. But once he arrived, there was trouble on the horizon that seriously threatened to cut off his musical career. In December 1820 the Austrian governor of Milan call up to military duty able-bodied man born between 1795 and 1800, and Donizetti was ordered to report between 15 and 24 December. At that time, both his brothers were already under arms. Francesco was in the Austrian army, while Giuseppe was a bandsman with the resistance poised to fight against the Austrians! Gaetano wrote to his composition teacher Simone Mayr “a friend (Dolci) had been called up,” and added, “but the hectic ones will be exempted, I believe.” As it turns out, Gaetano was able to avoid conscription completely, but it had nothing to do with his busy schedule!

The Imperial Austrian Army was the first pan-European army made up of different nationalities and faiths, counting among its soldiers not only Christians but also Muslims and Jews. And the Habsburg government certainly applied military conscription in all areas under its control. So how did Donizetti manage to avoid the draft? The real reason Donizetti and his friend were able to dodge the military draft surfaces in a letter written to his friend Dolci nearly twenty years later. “Remember the worthy woman,” Donizetti writes, “who did a favor for you and me in the matter of the conscription when we needed money?” That worthy woman turned out to be Marianna Pezzoli-Grattaroli, a highly successful businesswoman from Bergamo. Donizetti had already dedicated a number of scores to her, among them a “Sonata for Flute and Piano,” and a number of “Sonatas for Piano 4 hands.” And when it came time to pay his way out of the army, Donizetti approached Marianna Pezzoli-Grattaroli. Apparently, she sufficiently believed in the promise of these young musicians, and bought their exemptions from military service. 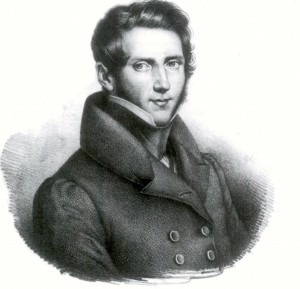 Ten years on, Donizetti scored his first international success with Anna Bolena given at the Teatro Carcano in Milan. After a couple of run-of-the-mill follow-ups, Gaetano really hit the jackpot with The Elixir of Love. Librettist Felice Romani borrowed heavily from an existing libretto about a love portion, and Donizetti wrote the score in between two and six weeks. After just four rehearsals, The Elixir of Love premiered in Milan in 1832, and was an instant success. This was perhaps due more to the charm of the opera than to the cast. On opening night Donizetti allegedly said “it bodes well that we have a German prima donna, a tenor who stammers, a buffo who has a voice like a goat, and a French basso who isn’t up to doing much.” Over the next 10 years, the sentimental comedy became the most popular opera in Italy and has remained continually in the repertory ever since.

You may well ask about the connection between Donizetti avoiding conscription and The Elixir of Love? At the heart of the opera’s libretto, you see, is the poor peasant Nemorino, who is desperately in love with Adina, a beautiful landowner who torments him with her indifference. When Nemorino learns of the story of Tristan and Isolde, he is convinced that a love potion will help him win Adina’s love. A traveling quack, meanwhile, sells Nemorino a bottle of cheap Bordeaux wine, and tells him that this powerful love potion needs 24 hours to take effect. In the meantime, Sergant Belcore has proposed to Adina, who stumbling over the drunk Nemorino, accepts the proposal. In desperate need to buy another “love potion,” Nemorino signs a military contract with Belcore. And when the traveling quack explains to Adina that Nemorino has spent his last penny on the elixir and joined the army for money to get more, Adina recognizes Nemorino’s sincerity, regrets her behavior and realizes that she has loved Nemorino all along. She now purchases back his military contract from Sergeant Belcore, and the couple lives happily ever after. For all we know, there was some kind of sexual tension between Gaetano Donizetti and Marianna Pezzoli-Grattaroli, but it was the purchased military contract that personally reverberated in the Elixir of Love!

Gaetano Donizetti: The Elixir of Love