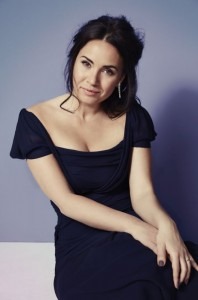 The Royal Opera House’s new production of Vincenzo Bellini’s Norma was one of the most anticipated performances of the season, principally due to the casting of Anna Netrebko in the title role. When the Russian diva pulled out shortly after Covent Garden announced their season’s line-up, the replacement became a wildly debated topic among opera cognoscenti.

Norma stands and falls with the quality of the protagonist, and it appears the Royal Opera House chose wisely. The young Bulgarian soprano Sonya Yoncheva proved a hugely capable and thrilling Norma. Equally at home in the stirring pianissimi as in the belted squillos, Yoncheva deftly handled even the most complicated coloraturas. Amazingly, she never seemed to tire. Energetically strutting around the stage throughout the evening, she showed not a tad of vocal or physical fatigue. When taking her final curtain call she looked ready to start the whole show again. The audience wouldn’t have minded hearing her sing the whole opera again. 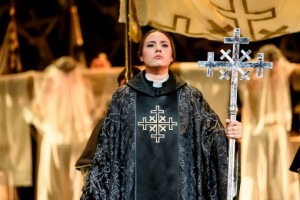 The production is an entirely different matter. Much as the director (Àlex Ollé of Barcelona’s Fura dels Baus) tries to convince us that his interpretation is about religious extremism and that Norma is a courageous woman torn by her conflicting convictions, his direction and the stage (set by Alfons Flores) make little sense. Roughly but inconsistently setting the opera in modern times (somewhere between Fascist Spain and the Jetsons’ apartment), the stage is lined and inundated with thousands of crucifixes. A canopy of crucifixes redolent of a crown of thorns is occasionally lowered over the stage. Crucifixes provide the shell for a churchlike structure, complete with pews, in what the libretto tells us is a forest scene. Norma delivers her casta diva as if preaching to a congregation from an elevated pulpit. Most of her druids wear liturgical cloaks with varying types of crosses, other sport capirote style white pointed hats as featured by some religious orders during Holy Week in Spain. And lest we not get the point, three live men with carry-on crucifixes stand by for good measure.

Pollione, the Roman governor in Gaul and Norma’s erstwhile lover and illicit father of her children, tries to entice the young priestess Adalgisa to follow him to Rome where other gods are being worshipped (what? even more crucifixes are in Rome?). For this important mission, Pollione is clad in a business suit. 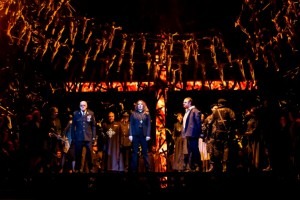 Oroveso, Norma’s father, leads a not-so merry band of crypto phalangists, and looks like a cross between General Francisco Franco and Doctor Strangelove. It seems like the main directorial innovation is to have Oroviso pull a gun and shoot his daughter rather than let her die on the pyre (also in the form of a cross, should anyone be wondering) with Pollione.

Perhaps the only successful moment was Norma and Adalgisa’s second act duet, which beautifully positions Norma as a priestess taking confession from Adalgisa.

While often visually impressive, this Norma remains cold and meaningless. No wonder the Royal Opera House really needed a superstar to keep this production alive.

Admittedly, turning the static and frequently boring plot of Norma into an engaging story is a tall order. But it is not impossible. Witness the Moshe Leiser and Patrice Caurier production for Cecilia Bartoli which credibly dragged the Druids out of the forest and into Vichy France, creating a thrilling, meaningful, and emotionally involving production.

The evening was easily dominated by Yoncheva. Sonia Ganassi provided a proficient and precise Adalgisa, though she was visually not quite believable as a young priestess. Joseph Calleja, a darling of the London audience, took a while to warm up but sang and acted with competence. Brindley Sherratt conveyed an angry Oroveso. The Orchestra and Chorus of the Royal Opera House were in their usual top-notch shape with Antonio Pappano moving things along at a steady and enthusiastic clip.