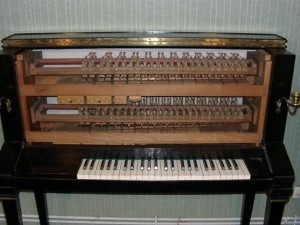 If you listen to Tchaikovsky’s “Dance of the Sugar Plum Fairy” from the Nutcracker, you are acutely aware of a silvery, ethereal and otherworldly sound coming from the orchestra. That sound, similar to that of the glockenspiel—a percussion instrument composed of a set of tuned keys arranged in the fashion of a piano and played with hard mallets—emerges from an instrument known as the celeste, celesta or chellesta. However you pronounce it, the instrument with the soft and subtle timbre takes its name from the French word “celeste,” meaning heavenly. The reason I mention Tchaikovsky and the celeste in the same breath, is because the composer became aware of this newly invented instrument during a visit to Paris, and he was determined to be the first to use it in an orchestral setting. He wrote, “Get me one of these instruments, but don’t tell anybody.” Sadly, Tchaikovsky was beaten to the punch by Ernest Chausson, who employed the celeste in December 1888 in his incidental music for La tempête, written for small orchestra.

The celeste first emerged from the workshop of the Parisian builder Auguste Mustel in 1886. The Mustel family had long been in the business of instrument making. Father Charles Victor founded the company in 1853 and produced an award-winning harmonium, a keyboard instrument similar to an organ, where the player pumps a foot pedal which operates a bellows that sends air to the reeds. The “Orgue Mustel,” later known as the “Harmonium d’Artiste” was built under license in Belgium and in Germany. In 1866, Charles Victor had a rather novel idea for a new instrument. He attached steel tuning forks to a wooden resonator, which were struck by felt-covered hammers via a keyboard. The “typophone,” also known as “dulcitone,” served Vincent d’Indy in his Le Chant de la Cloche, a composition for which he received a prize in Paris in 1884. In general, however, this instrument was not a great success simply because its sound projection was not loud enough to use in an orchestra. Yet it inspired Auguste to further develop the concept and he eventually came up with the celeste.

In appearance, the celeste looks remarkably similar to an upright piano. However, a modified keyboard mechanism connects to felt-covered hammers that strike graduated metal plates. Each plate is resonated by an accurately turned wooden box resonator, responsible for the dulcet tone of the instrument. Larger models, those with a range of four to five octaves, usually feature a sustaining pedal. The celeste is a transposing instrument, sounding an octave higher than the written pitch. Although a member of the percussion family, keyboardists are frequently called upon to play the instrument.

It did not take very long for composers of rank to discover the unique sound qualities of the new instrument. Gustav Mahler employed the celeste in his Symphony No. 6 and 8, and also in his Lied von der Erde. Puccini used it in Tosca and so did Richard Strauss in Ariadne auf Naxos, Die Frau ohne Schatten and most notably, in the presentation of the rose from Der Rosenkavalier. Arnold Schoenberg scored his song Herzgewächse (Foliage of the Heart) after a poem by Maurice Maeterlinck for coloratura soprano, celesta, harmonium and harp, and Benjamin Britten used the instrument in The Turn of the Screw and A Midsummer Nights’ Dream. The celeste makes a solo appearance in George Gershwin’s An American in Paris, and becomes the musical focus in Béla Bartók’s Music for Strings, Percussion and Celesta composed in 1936. In the slow third movement, considered a classic example of Bartók’s “Night music,” the celesta provides the eerie backdrop to nocturnal sounds and gracefully constructs a number of pentatonic melodies.