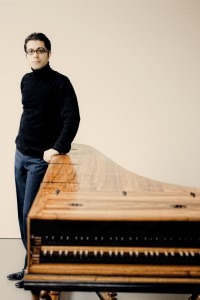 ‘You didn’t just wake up, did you?’ After many Facebook messages, negotiating times here and there to try and arrange a convenient time to talk, my phone finally buzzes unannounced on a Saturday morning, causing me to leap up and grab the nearest notepad. Turns out he’s quite an early bird. ‘I can’t really sleep for more than five hours,’ he muses, which must be helpful given his crazily busy schedule.

I speak to Mahan Esfahani just a week after him signing with Deutsche Grammophon. As a soloist he has already sold out Cadogan Hall, in addition to having played with orchestras such as the Academy of Ancient Music and the Orchestra of the Age of Enlightenment. Having witnessed a performance of his a week earlier in Bristol, I now get to witness this lighting-fast personality first-hand.

Esfahani is frank, yet well-informed. He thinks out loud, following through an idea or concept to its natural conclusion, ideas spilling out of him at speed; yet somehow it would feel wrong to ask him to slow down. You feel like you should rise up to his pace, rather than bringing him down to yours. I ask him, ‘Why the harpsichord? Did it come from the piano?’ and his passion for the instrument to be considered on its own terms is evident from the outset.

‘Personally, I don’t think it’s useful to talk about the harpsichord in relation to the piano. (I’m not saying you’ve got a bad question here, I’m just postulating.) It’s just like whenever you play the Goldberg Variations and someone mentions Glenn Gould. Why?

‘Why the harpsichord? I just like it. I just heard it one day and loved the sound. It’s just another instrument – and it’s a beautiful instrument.’

Despite facing such an inherently unstable career choice as Professional Harpsichordist, he is calm and pragmatic. ‘For a long time I spent many hours trying to assure people that it’s a serious thing. For a long time I was trying to justify myself, but once I stopped doing that it was so much better.

‘For me, it’s not about compromising. It sounds cliché, but music really is about sharing something with people, having that conversation. There’s something almost voyeuristic about it. I fess up to not being cool – but I’m ok with that.’

Even within the classical world, the harpsichord has a certain antiquated image – but instead of speaking of a ‘fight’ or ‘mission’ to change this image, Esfahani simply asks that people view it on its own terms, solidly in this century – and why shouldn’t we?

‘When I say the harpsichord is ‘just another’ instrument, I don’t mean it’s ‘different’. The actual mechanism is different, yes, but it just provides a new medium for sound, and many composers in the twentieth and twenty-first centuries have responded honourably to this.’ 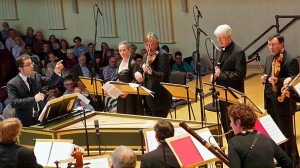 ‘I try to reengage with music in my own time as well as old music. I don’t think old music is dead. There seems to be an obsession with Old Music Being Dead. In Iranian culture, calling someone ‘old lady’ or ‘old man’ is a sign of respect. In the West, it shows a lot how this difference is viewed. I called someone ‘Grandfather’ when I helped him off the train the other day [in London] and he took such offence! It’s such a big difference of cultures.

‘I play contemporary music because I like to. I hate it in people’s biographies when it says ‘he/she is a champion of new music’ – as if they have to battle and defeat it. What if I just choose to play old music? Fads, I’m not big on. I just tend to play what I enjoy.’

So how to convince people it’s worth listening to? Two of my previous interviewees – Avi Avital and Martynas Levickis – had the challenge of taking an instrument with large folk connotations and putting it in the concert hall. The challenge Esfahani faces is not one of stature – the harpsichord has long associations of grandeur and opulence – but of relevance. And he believes the solution is simpler than it first appears.