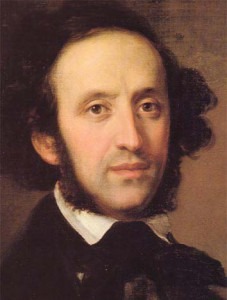 Paulus (St. Paul), Op. 36 (1836)
On 4 May 1836, Felix Mendelssohn (1809-1847) happily conducted the chorus of the Frankfurt Cäcilienverein, substituting for an indisposed colleague. Although he was certainly concentrating on the music, his eyes got distracted by a 16 year-old girl in the soprano section, which he described as possessing “luxurious golden-brown hair, a complexion of transparent delicacy and the most bewitching deep-blue eyes with dark eyelashes and dark eyebrows. The young lady in question was Cécile Charlotte Sophie Jeanrenaud, youngest daughter of the French Huguenot minister Auguste and his wife Elizabeth Souchay. Both the Jeanrenaud and Souchay families had immigrated to Frankfurt in 1685, when Louis XIV revoked the Edict of Nantes, which had granted the Calvinist Protestants substantial rights in deeply Catholic France. Contemporaries described Cécile as possessing “a slender figure, and facial features of striking beauty and refinement. She spoke little, with quiet, gentle voice”. And Mendelssohn, never prone to procrastination, fell instantly in love. However, within two days of meeting Cécile, he was forced to leave for Düsseldorf in order to prepare for the premiere performance of his oratorio “Paulus”. Once the Festival had concluded, he traveled to the costal city of Scheveningen, near The Haugue, in hopes that the freezing waters of the North Sea would somehow wash away his feelings for Cécile. Alas, it was hopeless, and by 7 June he had returned to Frankfurt in order to ardently pursue Cécile in courtship. When Cécile left town for a two-week holiday during the same month, Felix tried to console himself by composing the “Duett ohne Worte” Op. 38, No. 6 for piano solo, which scholars have described as an “instrumental love duet”. He also began, very carefully indeed, to inform his family of his feelings towards Cécile. He told them that he had met a “beautiful girl” and that he was “dreadfully in love”. Since both Cécile and Felix were talented artists, they spend hours painting portraits of each other, and given their respective Lutheran and Calvinist faiths, that’s surely all they painted! On September 9, in a forest clearing overlooking the city of Frankfurt, Felix asked the faithful question. I suppose Cécile said yes instantly, as he immediately reported to his mother, “my head is quite giddy from the events of the day; it is already late at night and I have nothing else to say; but I must write to you, I feel so rich and happy”. 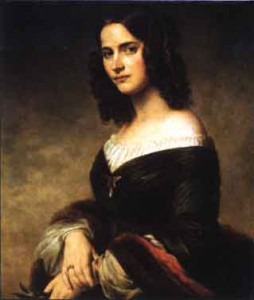 Lieder ohne Worte (Songs without Words), Book 3, Op. 38 No.6 Duetto (1837)
The wedding on 28 March 1837 at the French Reformed Church in Frankfurt was, entirely in keeping with the social standings of both families, a grand affair. The ceremony was performed in French, and his colleague and fellow musician Ferdinand Hiller composed a special bridal chorus. After a month-long honeymoon — during which they kept a daily journal of activities — the couple settled in Leipzig. Finally, Fanny Hensel was able to visit them, and wrote, “Cécile possessed a wonderfully soothing temperament, that calmed her husband’s whims and promised to cure him of his irritability”. And indeed, it did! The first of five children was born in February 1838, and the composer rediscovered “a contentment that he had not known since childhood”. On numerous occasions, Cécile would accompany her husband on his professional journeys, but unassumingly stay in the background and quietly support his career. However, both longed to spend more time in the domestic and idyllic tranquility of their stately Leipzig home. Mendelssohn reports to a friend, “I am sitting here at the open window, looking into the garden at the children, who are playing. The omnibus to Königstein passes here twice every day. We have early strawberries for breakfast, at two we dine, have supper at half-past eight in the evening, and by ten we are all asleep. And, to sum up, the best part of every pleasure is gone if Cécile is not there.” Of course, Mendelssohn remained extremely busy. As artistic director of the Leipzig Gewandhaus and founder of the Leipzig Conservatory, he not only initiated the revival of music by Bach, Handel, Haydn and Mozart, he also assured that his brand of musical historicism was disseminated throughout Europe and beyond. At the tender age of 38, fate cruelly intervened and claimed Mendessohn’s life. Clara Schumann hastened to comfort the young widow and writes in her diary, “Cécile received me with the tenderness of a sister, wept in silence, and was calm and composed as ever. Long we spoke of him; it comforted her, and she was loath for me to depart. She was most unpretentious in her sorrow, gentle, and resigned to live for the care and education of her children. She said God would help her, and surely her boys would have the inheritance of some of their father’s genius. There could not be a more worthy memory of him than the well-balanced, strong and tender heart of this mourning widow.” Apparently, both women were completely unaware — or pretended not to know — that in 1844 Mendelssohn met and fell in love with the “Swedish Nightingale” Jenny Lind, a fact, that even today, the Mendelssohn foundation does not want you to know. Lucky for you, I will tell you all the details next time.